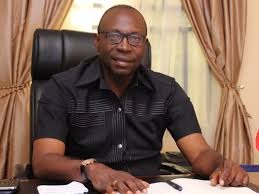 Peoples Democratic Party (PDP) 2016 governorship candidate in Edo, Pastor Osagie Ize-Iyamu, said on Sunday that he was not desperate about any political position.

Ize-Iyamu, who said this in an interview with Journalists in Benin, said “serving God has taught me not to be hasty in taking decisions.

“God is not talkative, to be able to talk to God you must develop a silent relationship with him. In everything I do I wait for God’s direction.”

Asked what his plans are ahead of the Edo 2020 governorship elections, he said  ”I leave my political direction in the hands of God because I’m not in any way desperate for power.

“Everything I do I try to let God direct me. In my political life also I have made it a point of duty to put the people first,” he said.

Asked about how is able to manage his Christian beliefs with politics, he said: “There is nothing that I have not seen in politics. They have made several attempts on my life, they blackmailed me, threatened me, told all kinds of lies against me, betrayed me.

“In fact, so many bad side of politics. People take an oath just to get power. So, a lot of Christians are afraid to go into it because of the dirty nature.”

The leadership of the party in the state had, in October, in Abuja, discarded the zoning formula in choosing both the state party Chairman and its governorship candidate.

A former governor of the state, Mr Lucky Igbinedion, who chaired the meeting, had disclosed the no-zoning arrangement after the Edo chapter of the PDP met with the national leadership of the party.

Igbinedion explained: “The idea behind a no-zoning system for the emergence of the governorship candidate and chairman of the PDP in the state is to throw up the best candidates for the two positions.”

He also said that the party adopted the zero-zoning option for both the governorship candidate and the state chairman as one of the measures to present a united party ahead of the 2020 governorship election in the state.

CoS to Borno Governor, Babagana Wakil, is dead