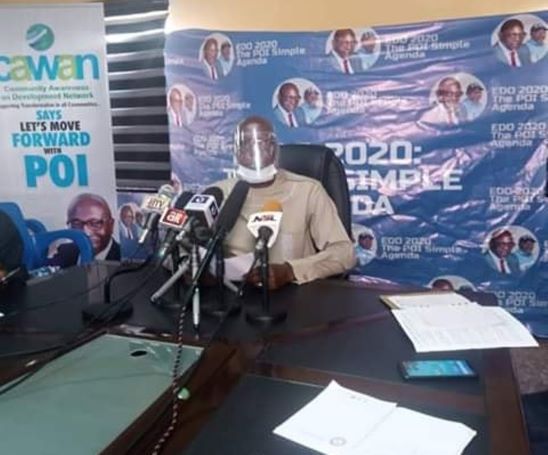 The APC further accused the Governor of abusing state powers and “behaving in a manner already seen since his unfortunate emergence in 2016.”

According to the APC, “Mr Godwin Obaseki has begun massive recruitment of thugs and criminals, but this time, officially into government.”

The party said independent verifications and revelations from the divided party that the Governor joined where majority of members are still smarting from his illegal imposition have revealed that the most recent appointments which were furtively handed out, were given to cultists of notorious history and origin.

They said Obaseki has ensured there is a spirit of competition ignited in these confraternity groups. “Obaseki draws from this deep well of violence and brutality in these groups, hoping to employ their brutish and bestial tendencies and unleash it on his opponents and dissenters in the coming days before, during, and after an election he is certain to lose because the people have rejected him,” APC said.

The party also stated that the state already had cause for worry, a valid reason to be afraid now, and not even tomorrow because the violence and chaos had already begun.

They said these cult groups, in a bid to show superiority and prove their mettle, had gone into unrestrained acquisition of weapons and initiation of new members.

“As it is, we are not sure that in the next two weeks, there will be an Edo youth who is not coerced into this evil association. No thanks to Obaseki, who in his desperation has incentivized violence, brutality, providing funds and backing for crime, thievery, and thuggery with public funds.

“In their initiation grounds, energized by the rare and unusual motivation provided by state funds, there are now reports of shootings and killings either out of unresolved feuds or in the bid to test the potency of their local bulletproof charms.

“This is the madhouse and anarchy Godwin Obaseki has unleashed on our State. Shall we fold our hands and continue to watch these things go unchalleged.

“We are certain that the people of Edo State know the right person and the right political party to thumb their electoral ink for, but we like to apply caution to the certainty of our wisdom.

“For this, we wish to announce to all Edo people, and to all the people of this country who loves peace and progress, the atrocious activities ongoing in our State.

“The day to boot Obaseki and his mindless partying out of Osadebey Avenue is already here, but under the light of new evidences, that short time may indeed be too long for the assurance of the security of all of us.

“We have seen the intolerant and undemocratic soul of the PDP and Obaseki. It manifested in their unthinking destruction of our party billboards, and this breathless propaganda aimed at throwing mud on our deeply thought out manifesto.

“We have been under the wrong thinking that their wicked and tasteless activities are limited to us as their political opponent but from recent discoveries, we are sad to inform everyone that this government who failed to provide the 200,000 jobs he promised has now proceeded, in the twilight of his tenure, to dole out SA and SSA appointments to thugs he intends to use to unleash violence and mayhem on all of us,” the APC said.

The party said the State Governor had his mind completely corrupted by tyrannical power, adding that they would be writing a petition to the Police and other security agencies, as well as INEC, to intervene and protect the election against the criminality and desperation of the Governor.

Oil rises further on hopes OPEC+ will hold back supply as...