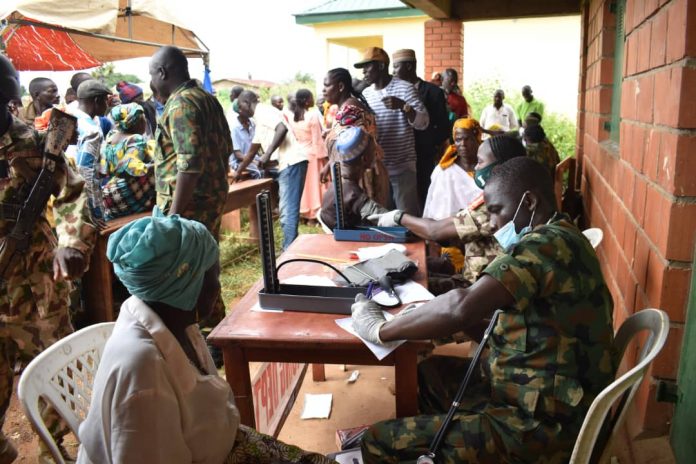 As part of its civil-military cooperation activities, the Defence Headquarters
has organised a two-day free medical outreach to Kamuru-Ikulu Communities in Zango Kataf Local Government Area of Kaduna State.
The programme, which aimed at winning the hearts and minds of the locals,  targeted giving free medical relief to about 5,000 beneficiaries.
In her remarks, the Team Leader, DHQ Medical Team, Brigadier General Florence Gyang said that the team was in the community in line with the directive of the Chief of Defence Staff, General Abayomi Gabriel Olonisakin, to provide free medical services to the community as part of the non-kinetic activities of the DHQ.
She stressed that the two- day programme covered free consultation, free health screening. free drugs, health talks, primary health care, eye tests and Issuing of eye glasses, deworming of children and issuing of mosquito nets.
While giving his remarks, the acting District Head of the Community, Hon. Nicholas Afel, thanked the CDS for the medical outreach, noting that the gesture did not only address their medical problems but also give them a sense of belonging.
Appreciating the medical team, one of the beneficiaries, Alice Shemam thanked the medical team for the good work, saying that before now she could not see very well, but with the  eye test treatment and eye glasses she received, she could now see clearly.
Also speaking, another beneficiary, Adamu Bako, a retired military officer, appreciated the DHQ and the team for looking into their medical challenges in the community, adding that they were very appreciative of the kind gesture.
The highlight of the event was the presentation of a souvenir by the Team Leader, Brigadier General Florence Gyang, to the acting District Head of the community, Hon. Afel.
Please follow and like us:

Elder Atidade is being pushed, says Adagunodo, debunks claims he is...

Police refute report, say no 14 year-old girl was killed at...