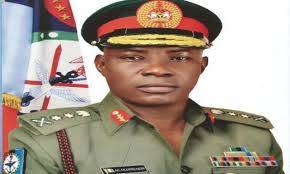 The Defence Headquarters (DHQ) has approved the establishment of the Directorate of Defence Media Operations (DDMO) for coordinating joint information management on peacekeeping and other combat operations of the Nigerian troops.

Towards this end, the Chief of Defence Staff (CDS), General Gabriel Olonisakin, has appointed Major General John Enenche as the Coordinator of the directorate with Brigadier General Ben E. Onyeuko as the Director of the new directorate and will be supported by Colonel Umar Aliyu as Army Liaison Officer.

The Directorate is tasked with the sole responsibility of disseminating information on Armed Forces of Nigeria and other security agencies during special operations.

The directorate is however expected to restrict its mandate to analyzing information on combat and peacekeeping operations, while strategically and tactically liaising with critical stakeholders.

It is also expected to periodically provide updates on joint military and security operations and activities.

Some of the operations include Operation Lafiya Dole in Adamawa, Borno and Yobe States; Operation Hadarin Daji in parts of Zamfara, Sokoto, Kaduna, Katsina and Niger States, and Operation Whirl Stroke in parts of Benue and Nasarawa States.

Other operations include Op Thunder Stroke on Abuja-Kaduna Highway/ Railway; Op Awase in parts of Lagos and Ogun States; Op Safe Haven in Plateau and Kaduna States; Op Delta Safe in oil producing states, and Safe Corridor for the deradicalization and integration of surrendered terrorists.

Where necessary, it will also analyse and coordinate information on Peacekeeping mission of Nigerian troops abroad especially in Mali, Gambia and Guinea Bissau.

Aregbesola says protection of life and property should not be handled...

Senate queries DPR for remitting only N44.5bn out of N2.4trn generated