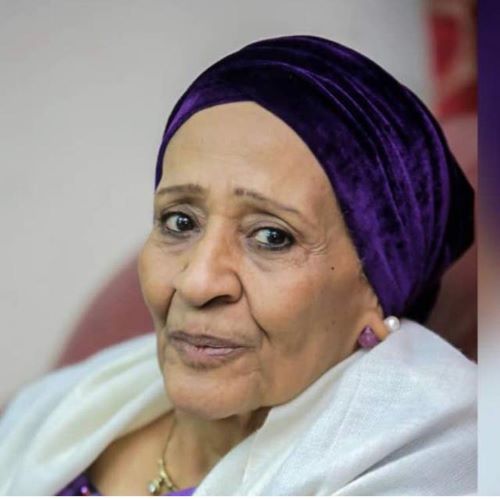 Former Military Administrator of old Plateau State, Air Commodore Dan Suleiman (retd), has lost his wife, Marie,  in an Abuja hospital on Tuesday at the age of 75.
According to the son of the deceased, Mr. Daniel Suleiman Jnr, his mother died from a surgery-related complications after she returned from a medical trip in India.
Describing his mother as industrious and hardworking, Suleiman Jnr praised his mum for being not only a symbol of inspiration to him, but also the entire family.

“Her death to me is devastating. She was an inspiration to me and my siblings. She was a strong mother who worked so hard both as a wife and a mother. I will forever cherish her memory,” he said.

Shortly after her death, sympathisers trooped to the Abuja home of the Suleimans to convey their sympathies. Among them were the President of the Middle Belt Forum (MBF), Dr Pogu Bitrus, Sen Jonathan Zwingina, Federal Permanent Secretary and Nigeria’s former Envoy, Dr Godswill Igali, among many others.

Dr Pogu described the Late Mrs Suleiman as a great tower of inspiration and extolled her for standing by her husband who is one of the leaders of the Middle Belt struggle.

“We commiserate with our leader over the loss of his wife and share in their moment of grief. Our prayers are with the bereaved family members of our leader. We pray to the Almighty God to grant them the fortitude to bear the irreparable loss,” the MBF President said.

President of the Southern Kaduna Peoples Union (SOKAPU), Hon. Jonathan Asake, described the death of the matriarch of the Suleimans as shocking.

He extolled the supportive role of the deceased for her family members, especially her husband, during his exile as leader of the National Democratic Coalition (NADECO).

At the Abuja home where sympathisers have continued to troop to express their condolences over the death of the former model icon and a trained nurse before her marriage to the retired air force officer on March 15, 1969.

Apart from being the First Lady of old Plateau State when her husband served as a military administrator during the Murtala/Obasanjo military regime, Mrs Suleiman held several prominent positions in Nigeria, including that of a director in the Jos Steel Rolling Mills.

Suleiman Jnr said that due to the current lockdown over COVID 19, the family is yet to announce burial arrangements for the matriarch. She is survived by her husband, five children and other relatives.

Mrs Marie was born to a business tycoon, Hassan Hallowi and Hajiya Halima Abubakar on the June 30, 1944. She was later taken to a convent where she was baptized and confirmed.

The young Marie attended Our Lady’s High School in Kaduna State, which was then managed by Catholic nuns for her nursery and primary.

She would later attend the Queen of Apostles College now Queen Amina College, Kaduna. She left for London to attend Bradford Royal Infirmary to study Nursing in 1960, and qualified as a registered nurse in 1964.

She proceeded to Charing Cross Hospital, London, where she studied for two years to qualify as a casualty nurse.