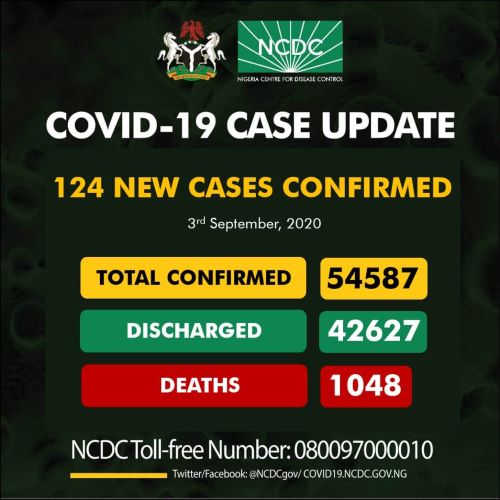 Nigerian Centre for Disease Control (NCDC), on Thursday night, announced 125 new cases of Coronavirus (COVID-19), bringing the total number of infections in the country to 54,587 cases.
The agency also confirmed 21 new deaths as the deaths figure increased from 1,027 on Wednesday night to 1,048 deaths on Thursday night.
It added that the deaths reported on Thursday night included 20 deaths in Kaduna State recorded in the past month as reported by Kaduna State Government.
The health agency disclosed that Lagos had the highest record of the new cases with 42, FCT-25, Katsina-14, Kaduna-11, Kwara-8, Ondo-7, Delta-4, Anambra-3, Oyo-3, Edo-2, Ogun-2, Osun-2 and Cross River-1.
The data from the health agency disclosed that there were 10,912 active cases while 42,627 patients had been successfully managed and discharged.
The agency apologised for erroneously reported 1 additional confirmed case in their summary earlier on the 3rd of September 2020, they erroneously reported 1 additional confirmed case in their summary.  It said the new confirmed cases were 124 and the total was 54,587, saying it remained committed to ensuring transparent and accurate reporting of test results.
Total confirmed cases in Nigeria-54,587
Total discharged cases-42,627
Total deaths-1,048
Please follow and like us:

We must start thinking about next pandemic – UN

Another 77 abducted persons rescued in Katsina