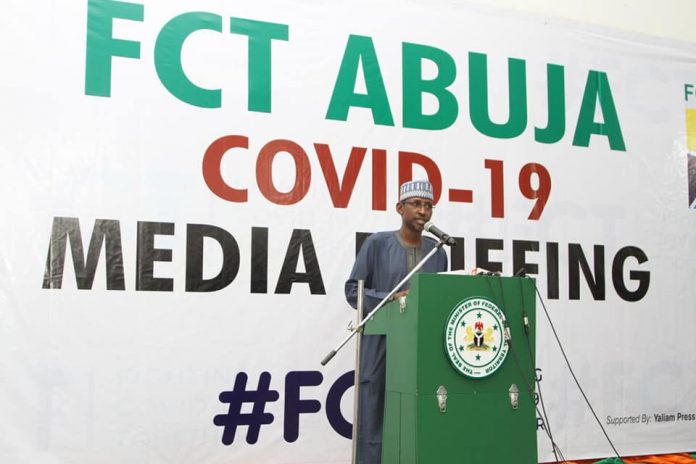 The Federal Capital Territory Administration, FCTA, will embark on a rigorous enforcement of all extant COVID-19 health and safety protocols to stop the spread of the disease in the FCT.

This was disclosed by the FCT Minister, Malam Muhammad Musa Bello, in a press briefing on the second wave of COVID-19 in the Territory held on Friday (18th December 2020).

Malam Bello said that the fight against the virus in the FCT had been mostly effective as had been attested to by stakeholders including members of the National Assembly, the Presidential Task force on Covid-19 and members of the public.

He also said that the FCT had maintained a high-testing ratio and recorded relatively few mortalities.

He however decried the rising number of positive cases in the Territory, which he said, were unacceptably high, adding that this was mainly because residents of the Territory had ceased to comply with recommended health guidelines put in place to curb the spread of the virus.

In his words “our recorded figures over the last 3 weeks have been unacceptably high and there is an urgent need to contain it as much and as fast as possible.”

Malam Bello disclosed that the enforcement teams would step up their activities and return to the streets of the FCT, working very closely with the judiciary through the mobile court system under existing laws.

The Minister also disclosed that the Administration would re-enforce its communication and public enlightenment strategies that would involve the active participation of local youth groups and non-governmental organisations, adding that “it is our intention that they drive these campaign processes to reach the nooks and crannies of the Territory.”

He urged residents of the Territory to play their roles if the FCT was to overcome the second wave of the pandemic.

Malam Bello called on residents of the Territory not to be carried away by the euphoria of the festive season and let down their guards against the virus, which he said had not lost its potency or capacity to make the afflicted very ill.

The Minister also revealed guidelines to curb the spread of the virus, which are based on resolutions reached during a stakeholders’ meeting held earlier in the week, the Public Health Advisory of the NCDC, and the Federal Executive council meeting.

The guidelines as released are:

i. The Abuja Market Management Limited and the various market associations should work together to carry out sensitization activities and also ensure compliance of all extant health protocols.
ii. All extant regulations issued as conditions for re-opening of places of worship on the 4th of June 2020 still subsists and heads of the various congregations are to ensure compliance.
iii. All extant regulations guiding the operations of entertainment and recreational centers still subsists and operators of such places are enjoined to ensure strict compliance.
iv. Public transportation facilities such as buses taxis and tricycles must also obey all already established protocols.
Other COVID -19 guidelines in offices and business premises are;
i. Mandatory temperature checks must be carried out on all employees and customers entering office and business premises in the FCT
ii. No mask, No entry, No service – all staff members, visitors and customers entering workplaces, shops or business premises must wear a face mask that should cover the mouth and nose.
iii. All office and business premises must have a handwashing station with running water and soap or hand sanitizer
iv. Restrict all physical meetings and instead opt for virtual meetings, whenever possible.
v. Office, shops and business premises must be well-ventilated and cleaned regularly throughout the day.
vi. Employees who are feeling unwell or have COVID-19 symptoms, should notify their supervisor immediately, or stay at home and seek medical attention to confirm diagnosis, by doing a COVID19 test.
Malam Bello also expressed the appreciation of the Administration to all medical and other frontline personnel in the fight against COVID-19.