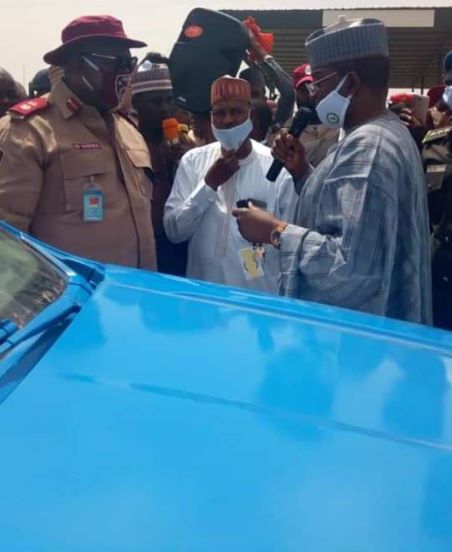 The Corps Marshal, Federal Road Safety Corps, Dr Boboye Oyeyemi has commended the Executive Governor of Zamfara State, His Excellency, Bello Muhammad Matawalle for his magnanimity and commitment towards the eradication of road traffic crashes in the State, as he donates 2 Ford Rangers  to the Zamfara State Sector Command of the Corps.

According to the Corps Public Education Officer, Bisi Kazeem, the Corps Marshal who expressed his warmest appreciation said that the donation is a demonstration of the Governor’s love and passion for the safety of all road users, not only in the state, but the country at large and the donation will definitely motivate the Corps Personnel to put in their very best in saving lives on the road.

While thanking the Governor for his unending support to the Corps, Oyeyemi enjoined him not to relent in availing the Corps any necessary assistance whenever the need arises.

Expectedly, he assured him that the Corps will put the vehicles to the best of use as he called on the Corps Personnel to reciprocate the Governor’s kind gesture with adequate maintenance of the vehicles and effective utilisation in the area of patrol operations and rescue services.

Obaseki felicitates Oba of Benin on birth of new princess

Just in: FG crashes data price by 50 per cent

Photos News: President Buhari presides over a Virtual meeting of the...