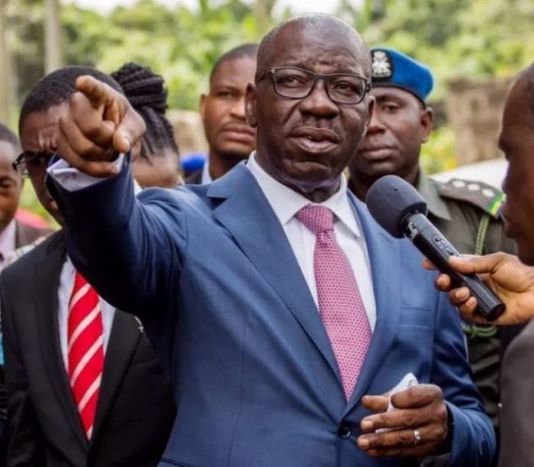 There are compelling reasons why Governor Obaseki will lose the governorship election coming up in sept 2020.

Governor obaseki’s government and its purported achievements have been built on false narratives, propaganda, falsehood and lies.

This government has been thriving on a false narrative of wanting to destroy GOD FATHERISM, a narrative they believe will sit well with the public cognitive perception of politicians. A falsehood they continue to reinforce in consonance with public perception.

They gave it a colouration that fighting Adams Oshiomhole was a fight against godfatherism.

Their idea was to continue to reinforce this narrative until the public accepted it to be true.

The truth of the matter is that governor Godwin Obaseki is now claiming to be a leader and godfather in his newly-found political party-the Peoples Democratic Party (PDP).

He said to all that cared to listen that he had read the PDP constitution and by virtue of his position as governor, he was now the leader of PDP. By implication, he can now begin to play the godfather role in the party.

This role he wanted to play in APC but the leadership of the party was too politically sophisticated for Governor Obaseki.

He left in frustration having been disqualified from contesting under the party. Governor obaseki also initiated another false narrative that members of the political class were thieves and good for nothing. He also continued using the principle of reinforcement.

This also situated well in the minds of the public, who generally thought politicians were the cause of the country’s issues.

He branded the APC members and leadership as criminals who were asking him to share the state money. But Governor Obaseki never listed the names of those politicians.

Governor obaseki continued with this false narrative while deceiving the people not to know that he was deliberating looting and carting the state money into foreign land.

Governor Obaseki basically bought PDP ticket with state funds. This is outside the humongous amount of money he spent fighting former national chairman of APC, Comrade Adams Oshiomhole and other APC members in the state. This we found very ironical in behaviuoral psychology.

Lastly governor Obaseki has been selling the false narrative that he has performed. Having allegedly received about N400 billion from statutory receipts outside other borrowed and grants.

Governor Obaseki has not justified this financial receipts in the state. Both in terms of physical infrastructure development or through human empowerment programmes.
Painting of buildings and construction of few roads in four years are below expectation of a government that had received so much and yet delivered so less.

Governor Obaseki in his almost four years in power has not resurrected any industries, initiated or attracted any to Edo state.

In terms of job creation Governor Obaseki has failed woefully.

He is flagging off his second term bid without any programme or agenda for development. No evidence of his achievement over the last four years.

The SIMPLE AGENDA unfolded by the APC candidate, Pastor Osagie Ize-Iyamu, is all encompassing with detailed implementation plans. It is based on the specific principles. It is measurable, accurate, reliable and time bound.

This Simple Agenda vision of Pastor Osagie Ize-Iyamu details how jobs and physical infrastructure development would be initiated and implemented in the state.

Pastor Osagie Ize-Iyamu is a man with clear vision and focus, who is determined to transform the state into global standards. GOD’S TIME IS NOW, EDO MUST MOVE FORWRD.

WHO supplies land in Afghanistan