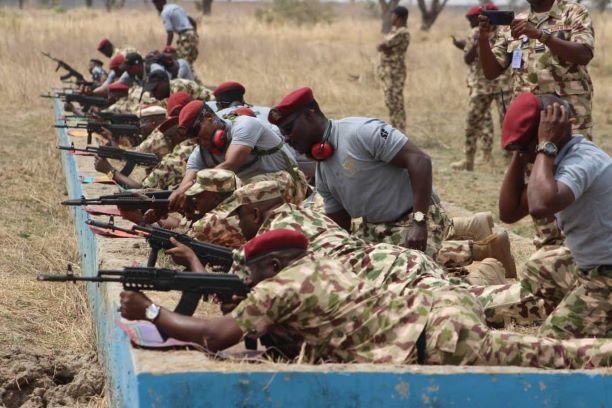 Confirming the report, the Director of Public Relations and Information, Air Commodore Ibikunle Daramola, said in a statement that the Chief of Air Staff, (CAS) Air Marshal Sadique Abubakar, noted that the contemporary security challenges facing the nation had necessitated the training of more personnel as Special Operatives.

“These operatives enable us to achieve effects outside the perimeter, thereby conferring upon us the necessary advantages to confront asymmetric threats,” he stated.

He said the CAS disclosed that, the NAF had increased the number of personnel recruited into the Service with a view to building the capability of Regiment personnel in protecting NAF units.

He further noted that the NAF had trained 4,000 personnel both locally and overseas to meet specialized needs in Force Protection.

He disclosed that the NAF had also built specialized training facilities such as Commando training villages and rappelling towers for the continuous training of Regiment/ SF in Kaduna, Ipetu-Ijesa, Gusau and Bauchi.

This, he said, was in line with his Vision to transform the NAF into a highly-professional and disciplined force through capacity-building initiatives for effective, efficient and timely employment of airpower in response to national security imperatives, as well as one of the key drivers, which hinge on human capacity development for improved professional performance.

While congratulating the students on scaling the grueling screening process, he charged them to imbibe the attributes of special operatives, which included honesty, courage, perseverance and adaptability to enable them earn a place among the elite team of NAF ‘PANTHERS’.

He also took the opportunity to appreciate the Commander-in-Chief of the Armed Forces, President Muhammadu Buhari, for the priority attention and support given to the NAF, which, he said, had impacted positively on the NAF in the areas of training, operational efficiency and improved welfare.

He therefore assured of the NAF’s unalloyed loyalty and commitment to continued support for the Federal Government’s policy thrusts of providing security, improved economy and fighting corruption.

The Commandant RTC Annex Bauchi, Wing Commander Kehinde Akinyosade, said the course was aimed at equipping trainees with the necessary skills, tactics and procedures required to function effectively as operatives in the NAF SF unit.

He further explained that the RTC, which is tasked with conducting basic and advanced training for personnel of the Regiment Specialty, had 2 annexes in Bauchi and Ipetu-Ijesa, which conduct specialized training for desert and jungle terrain, respectively.

He said that SF Course 6/2020, which is the second being conducted at RTC Annex Bauchi using indigenous instructors, had a total of 117 personnel, comprising 7 officers and 110 airmen/airwomen, who were selected from an initial 275 personnel who reported for screening.

The occasion featured live firing at the shooting range site as well as the inauguration of a 40-ft rappelling tower and obstacle course, which has 23 different apparatus including the sky scraper, ‘Burma’ bridge, deep pool, treble stride ditch, 15ft double wall and swinging duck bridge, among others.

Another highlight of the event was the crossing of the obstacle course by selected students of the course.

Dignitaries that were present on the occasion included the AOC Special Operations Command, Directors from NAF Headquarters, Commanders of co-located NAF units as well as heads of other security agencies in Bauchi.

It is noteworthy that the NAF is currently conducting Combat Search and Rescue (CSAR) training for 35 Regiment/SF personnel at the RTC Annex Ipetu-Ijesha, while 2 more SF courses are planned to take place during the year.

One is expected to take place at the 211 Quick Response Group Owerri and the other is expected to hold at Toru-Orua in Sagbama Local Government Area of Bayelsa State.

Malawi”s new President sworn in  pledges better Malawi for all