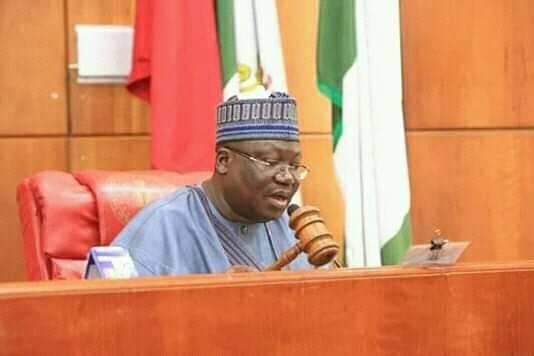 The Nigerian Inter-Religious Council (NIREC), under the Co-Chairmanship of Alhaji Miihainmadii Sa’ad Abubakar, the Sultan of Sokoto, President General of the Nigeria Supreme Council for Islamic Affairs (NSCIA) and Rev. Dr. Samson Supo Ayokunle, the President of the Christian Association of N igei-ia (CAN), has noted with concern the controversy that is brewing over the Companies and Allied Matter Act, 2020 (CAMA).

The CAMA amendment Bill was passed by the National Assembly and signed into law by President Muhammadu Buhari.

According to a statement issued on Monday by the NIREC’s Executive Secretary, Prof. Cornelius Afebu Omonokhua, the religious body was aware that “CAMA is 30 years old before the passage of the CAMA 2020 (Anendments).

NIREC said:” the Nigerian Inter-Religious Council (NIREC) under the leadership of the Co-Chairmen, Alhaji Muhammadu Sa’ad Abubakar, the Sultan of Sokoto, President General of the Nigeria Supreme Council for Islamic Affairs (NSCIA) and Rev. Dr. Samson Supo Ayokunle, the President of the Christian Association of Nigeria (CAN) has noted with concern the controversy that is brewing after the National Assembly passed the Companies and Allied Matter Act, 2020 (CAMA) and it was subsequently assented to by the President.

“NIREC is aware that CAMA is 30 years old before the passage of the CAMA 2020. NIREC is also aware that laws are amended, reviewed or reformed periodically to address socio-economic changes in the society.

“It is, therefore, not surprising that the National Assembly decided to pass the CAMA 2020. This is more imperative in view of the need for our country to improve its ranking in ease of doing business and fight against corruption.

“NIREC is aware that it is the constitutional responsibility of the National Assembly to make laws for peace, order and good government in Nigeria.

“We are, however, advised and guided that in the legislative process, laws may emanate from the National Assembly or from the Executive or any of its agencies as well as from private individuals or groups.

“We also noted with admiration that from time to time, the National Assembly, in the course of its law-making process, invites stakeholders to participate in public hearings before a Bill is passed.

“This good practice of engagement with stakeholders before passing any law must continue as the citizens will be happier with a law that contains their input. NIREC calls on the National Assembly to therefore listen objectively to the reactions of the citizens on CAMA in the spirit of democracy while the citizens should be law abiding in the spirit of patriotism.

“All citizens should be aware that even after following due legislative process in making any law (including CAMA 2020), it does not become sacrosanct. Citizens with genuine observations are free to express them. NIREC advises all well-meaning individuals and groups to be patient on this issue that has constitutional and democratic solutions.

“One of the beauties of democracy is that citizens have their representatives in the legislature. Apart from the representatives, sponsorship of private Bills is allowed.

“All those aggrieved by the passage of the CAMA 2020 should therefore resort to the legislative process by proposing either an amendment or repeal of the CAMA 2020. It will then be left for the National Assembly to consider such Bills in their own merit.” 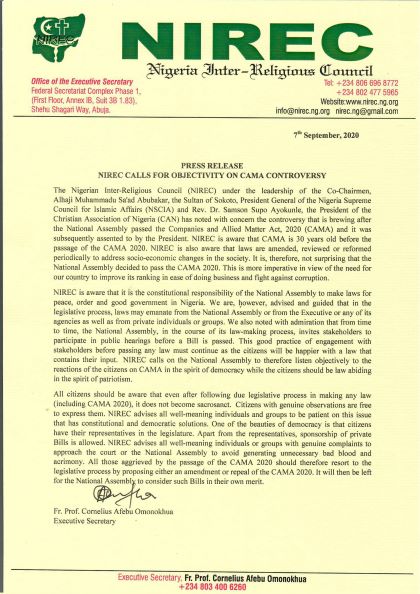