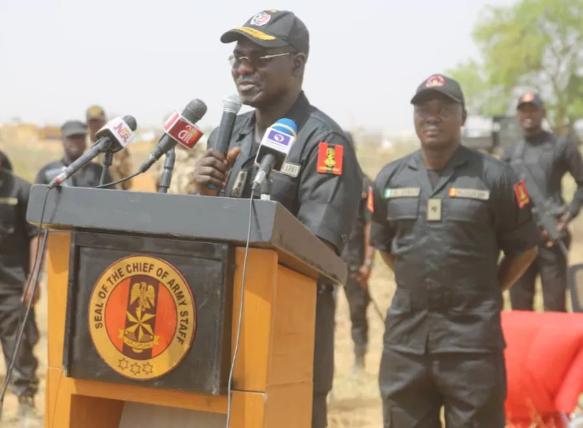 The Chief of Army Staff (COAS), Lt.-Gen. Tukur Buratai, has enjoined troops of the 133 Special Forces Battalion, Azare, Bauchi State, to redouble their effort toward defeating the Boko Haram insurgents in the North-East.

Buratai stated this on Wednesday when he visited the battalion headquarters as part of his operational visit to theatres of operations.

While addressing the officers and men of the battalion, he commended them for their efforts in different operations in the North-East and North-West zones.

The COAS also conveyed the appreciation of the Commander-in-Chief, President Muhammadu Buhari, to the troops for the contributions of the army to national peace, security and development.

While enjoining the troops to remain focused, he encouraged them not to be distracted in their patriotic struggles to secure the nation.

Buratai was briefed by the Commanding Officer, Capt. A.W. Arumse, on the operational, administrative and logistics state of the battalion.

The COAS also inspected completed and ongoing projects in the barracks, including the renovated medical facility. (NAN)

DSS: We did not disperse doctors seeking Saudi Arabia job