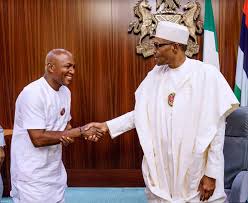 The governor-elect was accompanied on the visit by National Chairman of the APC, Adams Oshiohmole, Gov. Atiku Bagudu of Kebbi state, Gov. Badaru Abubakar Jigawa as well as Minister of State, Petroleum Resources, Mr Timipre Sylva.

Lyon, the All Progressives Congress (APC) governorship candidate in the Nov. 16 election in Bayelsa was declared winner after polling 352,552 votes.

PHOTOSPEAK: IMAGES OF OFFICERS WHO DIED IN NAF BEECHCRAFT 350 IN...

Buhari swears in members of CCB, PSC, presides over FEC

Senate confirms Bawa as EFCC chair, tells him to “take a...