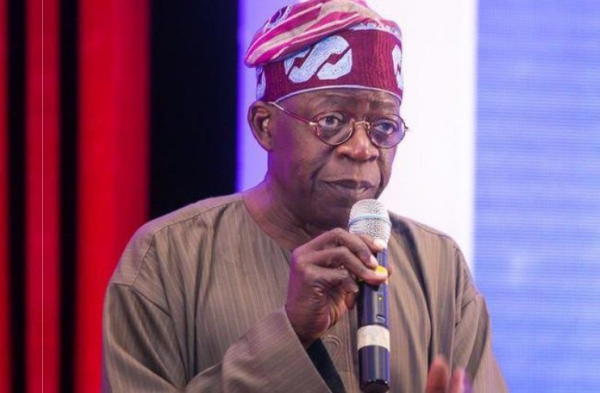 A national leader of the All Progressives Congress, Senator Bola Ahmed Tinubu has spoken on the lingering #EndSARS protest.

Read him: For the past twelve days, our country has witnessed massive protests by youths in different cities, which were ignited by widespread disenchantment with the gross human rights abuses including torture, extortion, harassment, intimidation and even extra-judicial killings of Nigerians by members of the disbanded Special Anti-robbery Squad (SARS). The demands for fundamental police reforms by the protesting youths are in pursuit of our aspiration in our national anthem “to build a nation where peace and justice shall reign”. Justice as one of our greatest writers has memorably noted is “the first condition of humanity”.

A society where those who are paid from the public purse to protect the lives and property of the people become themselves threats to the liberty, safety and dignity of the people; where human life is difficult to distinguish from Thomas Hobbes ‘State of Nature – ‘solitary, poor, nasty and brutish’ is not one fit for free and decent people to live in. Such impunity and lawlessness are incompatible with the values and tenets of a democratic society governed by the supremacy of the rule of law.

It is impossible for anyone truly committed to the rule of law, democracy and good governance to be opposed to the concern and demands of the protesters. There is no way that any society can make meaningful progress without the enthronement of these values. The protesters have for the better part of the commencement of their civil action conducted themselves with an admirable sense of responsibility, restraint and maturity. This is commendable. Indeed, the high level of organization demonstrated by the protesting youths shows a new level of consciousness of the capability of a vigilant civil society as well as the efficacy of people’s power. This can only ultimately strengthen the country’s democratic evolution and sustainability.

Arnold Toynbee, the great 19th century historian observed that societies progress through a process of ‘challenge and response’. Society confronts challenges such as injustice, impunity, corruption, dictatorship and are forced to respond in resistance and struggle for emancipation. The result is the triumph of justice over injustice, liberty over tyranny and right over wrong thus enabling the society to be elevated to a higher level of good, accountable, responsible and responsive governance. It was through this process that colonialism, apartheid, and all forms of dictatorship, misrule and tyranny have been overcome across time and space. Our current democratic dispensation was borne of struggle in response to the challenge of military dictatorship.

The impunity of SARS was thus a challenge that the youth have responded positively and courageously to and has triggered the commencement of the fundamental reform of the country’s policing system. But then, the protesters must admit that the President Muhammadu Buhari administration has acted with commendable dispatch by not only scrapping SARS but also accepting the five-point demand that triggered the protests. This shows a laudable sensitivity to the grievances of the youths. It is only fair that government must be given the chance to implement the reforms demanded by the protesters. This can certainly not be done instantaneously by the waving of a magic wand. If government had not implemented promised reforms in the past, the swiftness with which it has responded to the demands of the protesters this time around shows that that there is a positive change by government both of attitude and of a new sense of urgency.

The protesters have made considerable gains within a very short period. But they should also be careful not to fritter away such gains due to lack of moderation and strategic thinking. For instance, it is unfortunate that hoodlums, thugs and assorted criminals have seized on the protests to perpetrate violence, disrupt civil life and harass, intimidate and assault innocent persons going about their lawful business. The intent of the organizers of the protests is to achieve stated objectives on police reform, which the government has in principle accepted. It can certainly not be their motive to cause generalized anarchy or effect regime change. If they give the impression that that is their goal, then any government will necessarily have to act with the requisite decisiveness and force to restore law and order and preserve constitutional rule.

The vigour and vibrancy of the protests are an indication of the growing strength of the democratic culture in Nigeria. It is a demonstration of the beauty of democracy and its promotion and protection of people’s power. However, the protesters must be careful not to set the stage for the erosion or destruction of the same democratic process that gives them the freedom and right to protest in the first place. Their democratic right to protest must not be exercised in such a way that impedes the democratic right of other citizens to freedom of movement, expression and the liberty to pursue their livelihoods. The fight for police reforms is surely to promote and protect the wellbeing of millions of Nigerians. It is a contradiction for the protesters to act in ways that will further worsen the economic well being of the very people they are fighting for.

It is important that the ruling All Progressives Congress (APC) utilize this protest as an opportunity to go back to the drawing board and recommit itself to the values for which the party was formed through extraordinary hard work, dedication and commitment. There is no doubt that the party has recorded tremendous achievements in diverse sectors since 2015. But it now has to sit back, examine the gaps between its promises and its performance in order to make necessary amends. It is important that all members of the party put aside petty and shortsighted ambitions, needless infighting and unite to support the government of President Muhammadu Buhari to focus on delivering on its mandate for the remainder of its tenure.

In the final analysis, the cure for protracted and delicate national problems is to continue to strengthen the democratic process rather than engage in acts that can lead to generalized anarchy in which democracy cannot thrive. The protests have forcefully demonstrated the reality and potency of people’s power and the new energy must be tapped and channeled to strengthen, not weaken the country’s democracy. Surely, the country cannot remain the same after this. The government has demonstrated its sensitivity to the demands of the youth and must now be supported to implement the reforms it has committed itself to. It is a good sign that Governor Babajide Sanwo-Olu in Lagos and a number of other state governments have speedily set up judicial panels of inquiry into acts of police brutality over the years. I urge the state governments which are yet to do so to emulate this example. This process of change should be supported and this cannot be done in an atmosphere of endless protests that are also crippling an economy already enfeebled by the COVID-19 pandemic.

Let me commend all our religious leaders, Christians and Muslims for their patriotism and high sense of responsibility at this sensitive time. I appeal to them to call on their teeming followers to call off the protests for now and give peace a chance. Finally, I also strongly appeal to the protesters – YOU HAVE MADE YOUR POINT. GOVERNMENT HAS MADE ITS COMMITMENT TO YOU. PLEASE, PLEASE AND PLEASE, CALL OFF THE PROTESTS. GIVE GOVERNMENT A CHANCE TO IMPLEMENT YOUR DEMANDS. GOD BLESS YOU.