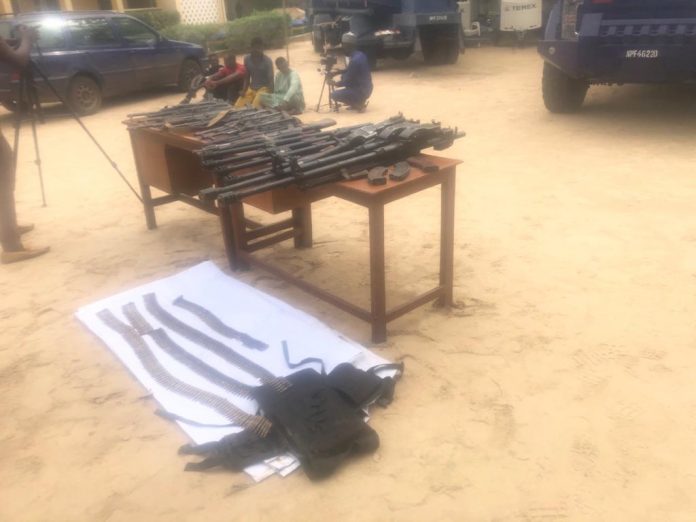 By Bode Olushegun
The Nigeria Police Force has recovered arms and ammunition from the scene of Monday’s Boko Haram ambush on soldiers along Maiduguri-Damaturu road.
Addressing a press briefing on Tuesday, the Borno State Commissioner of Police, Mohammed Aliyu said the command has began investigation to verify who might have dumped the weapons.
Aliyu explained that personnel of the special anti-robbery squad (SARS) stationed in Auno town got information about the attack and immediately mobilized to the scene to support the military.
He said on arrival at the scene of the confrontation, the personnel saw a vehicle burning in flames and another camouflage Hilux Toyota had capsized.
He said they later recovered the arms and ammunition and saw a corpse in mufti near the recovered arms and ammunition.
The Commissioner of Police who displaced the weapons before journalists, said: “We are yet to get the clue of what the position of those arms are, are they for the military or are they for the insurgents, we don’t know yet. The weapons are in our custody as you can see.”
Aliyu said weapons recovered include eight AK47 rifles, two Anti Aircraft, a multipurpose machine gun, two magazines with 51 rounds of ammunition, 270 rounds of multipurpose gun ammunition and two spared barrel.
Please follow and like us:

My grouse about Obaseki, by Oshiomhole