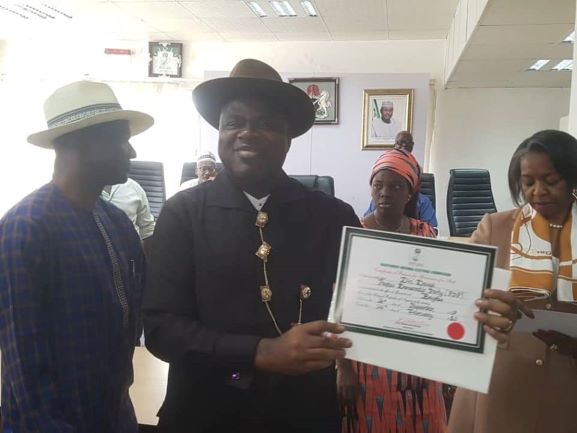 The Independent National Electoral Commission (INEC) has declared the candidate of the Peoples Democratic Party (PDP), Duoye Diri, as the winner of the Bayelsa election.

The INEC Chairman, Mahmood Yakubu, who made this announcement on Friday at the INEC headquarters in Abuja said the certificate of return would be issued immediately to the winner.

Yakubu told journalists at the Commission’s Headquarters that they had received the true certified judgement of Supreme Court.

According to him, the Commission met on Friday morning to review the results of the election, without the votes of the APC which had been voided by the court.

The total votes cast after excluding those of the APC now stand at 146,999. PDP’s candidate polled 143,172 and scored 25 percent as required by law.

As of the time of filing this report, ConclaveNg confirmed that INEC had issued Certificate of Return to the candidate of the Peoples Democratic Party (PDP), Duoye Diri.

Nigeria’s representatives arrive in Cameroon for repatriation of 9,800 refugees

Senate moves to give legal backing to de-radicalization of repentant Boko...