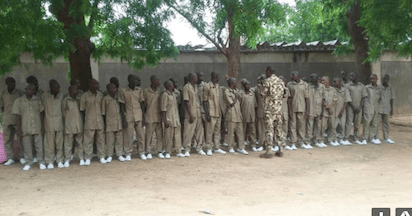 The Nigerian Army on Wednesday handed over to Borno State Government 25 members of the terrorist group, Boko Haram, who denounced the organisation and surrendered to constituted authorities.

The Army gave them to the Borno State Government, the birthplace of Boko Haram, in order to facilitate their rehabilitation and reintegration into the society.

The Coordinator, Operation Safe Corridor, Maj. Gen. Bamidele Shafa, who brought the repentant insurgents from the neighbouring Republic of Nigeria, handed them over at the Bulunkutu Rehabilitation Center, Maiduguri.

Shafa disclosed that the 25 comprises men, women and children who laid down their arms and surrendered to the Nigerien government.

He, however, declined to speak on the details of the arrangement with the Nigerien government but declared that all the 25 were Nigerians.

Speaking after taking delivery of the repentant Boko Haram, the Borno State Commissioner of Women Affairs, Haija Zuwaira Gambo, said the government would reunite them with their families.

She promised that the state government was ready to give them required skills and basic education that would make them useful to the society.

She said: “In Bulumkutu Rehabilitation Center, we will provide them with physical and social supports, we will feed them, give them clothes and gives them some basics of education.

“They were brought from Niger Republic and our is to reunite them with their loved ones. I think it is right time we sent a correct message out there. Anyone can be a victim.

“There are different kinds of people the military has brought; some are suspects arrested in the wrong place and at the wrong time;  some also have been cleared by security agencies of any wrongdoing. So, I will like to say that not everyone brought here by the military is an ex-insurgent.”