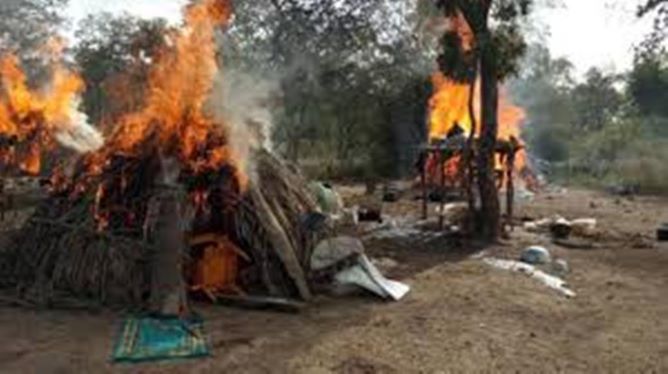 Soldiers under special operation, Exercise Sahel Sanity, have killed seven bandits in three theater areas of Katsina, Zamfara and Sokoto states.
Brig. Gen. Bernard Onyeuko, Acting Director, Defence Media Operations, said in a statement on Friday in Gusau, that the army operations was carried out between July 14 and July 17.
Onyeuko said that troops of Defence Headquarters Special Operation Forces deployed at Batsari had engaged some armed bandits at Jigawar Mallamai, in Danmusa LGA of Katsina State and four bandits were neutralized.
He further said that one AK 47 rifle and 21 motorcycles were recovered from the bandits which were destroyed instantly.
The army spokesman said that on July 15, troops, while conducting clearance operation on suspected bandits hideouts at Garin Maza, Tamuske, and Garin Bagwari villages in Sabon Birni LGA of Sokoto State encountered the bandits.
”This resulted in the killing of three of the bandits and the recovery of six motorcycles which were destroyed along with their hideouts,” the spokesperson said.
He stated that while acting on credible intelligence, troops deployed at Forward Operation Base Bingi arrested five suspected bandits who tried to sell 17 cows and a goat at Bingi market in Maru LGA of Zamfara State.
Onyeuko noted that preliminary investigation revealed that the animals were earlier rustled from Gabiya village.
He also said that troops deployed at Forward Operation Base Danjibga in Tsafe LGA of  Zamfara handed over 121 cows and 37 sheep recovered from rustlers to the Recovery of Rustled Animals Committee for necessary action.
He confirmed the arrest of a bandits’ informant at Isa-Matete Junction, Isa LGA Area of Sokoto State, currently helping in investigations.
NAN
Please follow and like us:

ICPC says not issuing, charging fees for “certificate of clearance” for...