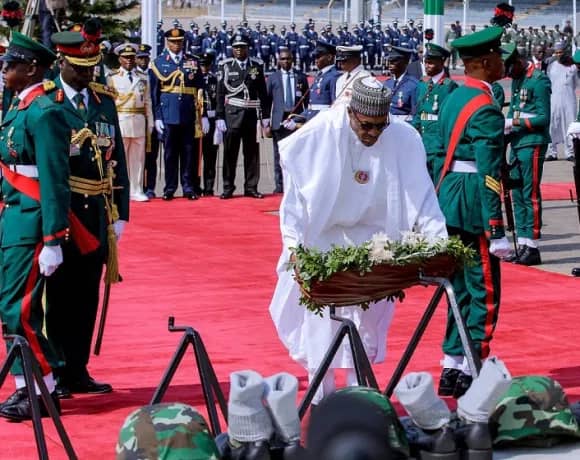 The event was the traditional laying of wreath, which climaxed activities to mark the 2021 Armed Forces Remembrance Day.

The activities had begun with the launching of the remembrance emblem last year.

Buhari led Vice President Yemi Osinbajo; President of the Senate, Ahmed Lawan; Speaker of the House of Representatives, Femi Gbajabiamila;the Chief Justice of Nigeria, Tanko Muhammadu, and the nation’s security chiefs to lay wreath in honour of the fallen heroes.

The event was solemn.

It held at the National Arcade, opposite Eagles Square, Three Arms Zone, within the precinct of the Federal Secretariat, Abuja.

Federal civil servants were directed to stay away from their offices for security reasons.

The roads in and around the premises of the Arcade and Federal Secretariat were cordoned off for the duration of the ceremony.

Apart from the laying of wreath, the event featured special prayer sessions for living and fallen heroes; a minute silence in honour of fallen heroes; gun salute; release of doves to represent peace and signing of the anniversary register among others.

A trip of tradition, a commitment to cooperation — the 32nd...