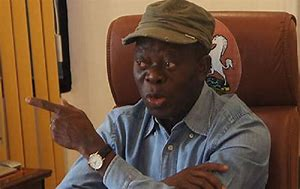 Governors who want All Progressives Congress’ (APC’s) Chairman, Adams Oshiomhole, to remain in office met in Abuja on Sunday to strategise on how to counter those pushing for his exit.

The pro-Oshiomhole governors met last night at the Kano State Lodge in Abuja.

A source at the meeting said it was to articulate how to counter the anti-Oshiomhole group at the party’s National Executive Committee (NEC) meeting scheduled to hold on Tuesday.

Also on Sunday, some APC leading members passed a vote of confidence in Oshiomhole.

They took the position during an interactive session in Abuja.

Akpatason described Oshiomole as one of the greatest gifts to the country.

“He is a no-nonsense man and so I am not surprised that he has enemies here and there, especially as we have individuals who for their selfish reasons would want to pull down an organisation the moment a leader does not do their bidding,” he said.

Ogiemwonyi said Oshiomhole’s antagonists were those not comfortable with his high standards.

“Those who are backstabbing him today were people he helped, including governors. The problem is that once you are doing the right thing, you will step on toes.

“Comrade Oshiomhole is a victim of doing the right thing. What is happening today is about 2023. Oshiomhole is trying to build the party to make it more attractive for people but some are not happy,” Ogiemwonyi said.

Alapa faulted Tuesday’s emergency NEC meeting, saying the law was not followed in convening it.

Convener of the session, Mr Blessing Agbomhere, said: “We are here to interact and provide solutions. “We want to make our contributions to the unity and progress of our party because we are concerned about the issues in the party.”