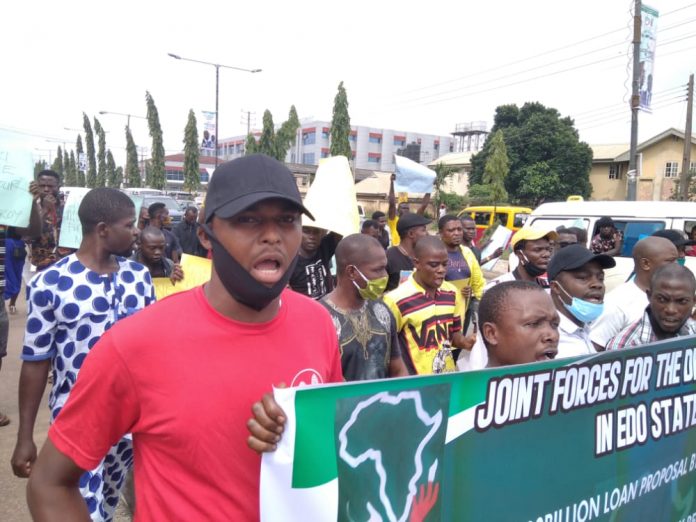 Days after reports of alleged plans by the Edo State Government to obtain a 20 billion naira loan to fund the campaign of the incumbent Governor Godwin Obaseki emerged, youths and other Civil Society Organizations in the State staged a massive protest in Benin City today, Tuesday, demanding that the government abandons such plans and provide accountability on previous loans.

The protest, attended by hundreds, crippled commercial activities and impeded the flow of traffic at the popular Kings Square, also known as Ring Road, as youths and other groups under the aegis of the Joint Forces For the Defense of Democracy, JOFDES, converged there before proceeding to the secretariat of the NUJ.

Comrade Felix Osemwingie and Kola Edokpayi who served as spokesperson of the protesters lamented the spike in the state’s foreign and local debt profile in the Obaseki-administration and condemned the alleged fresh plans to obtain fresh loans as a wicked and reckless attempt to mortgage the future of the youths and people of Edo State.

Another activist, Comrade Aigbogun Emmanuel, accused the Governor of considering fresh loans when the state is presently servicing the alleged $150 million credit obtained from the World Bank in 2016 and 2017.

In reaction, the Obaseki-administration said the protest was sponsored by his opposition but the allegation was dismissed by the Edo APC.

In a statement by John Mayaki, the Chairman of the State Media Campaign Council, the APC said the claim was ludicrous and insulting to the youths of Edo state who are known for their agency and independence of thought.

He said: “Is Godwin Obaseki suggesting that Edo youths cannot read the news, interpret it, and understand the implications of a failed government seeking loans toward the end of its tenure?”

“What’s interesting here and journalists ought to focus on, is Godwin Obaseki’s refusal to directly speak to the reports on the loan acquisition. There has been no one to state categorically and on the record that no such plans exist.”

“Godwin Obaseki is trying to deflect attention and distract the people and the press from the real issues with frivolous allegations. Are you obtaining a loan or not? What is the loan for? Why are you seeking a 20 billion naira loan during the heat of an election you are already guaranteed of losing? Those are the issues that need answers.”

“We do not sponsor protest, neither do we claim to control the minds of the people. If Obaseki and his aides have such arrangement through which they channel funds to people to protest on the streets, they should come out and tell the world as that is not part of the APC modus operandi.”

UNIDO connects TICAD7 with IDDA III And AfCFTA to partner for...

Lindsay Barret: A man of great social and literary consequence, By...

Osinbajo’s aide paid N250m contract sum and he did no job,...