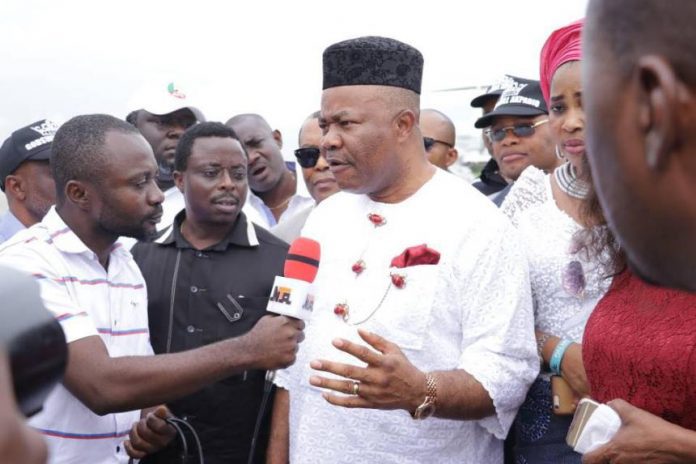 Mr Akpabio, who spoke on Saturday in an interview programme with the NTA, said he was sure that those who founded the NDDC would be disappointed with what has become of the commission.

The NDDC was set up in 2000 by the administration of President Olusegun Obasanjo to fast-track development in the oil-rich Niger Delta region of Nigeria.

Nineteen years later, the region still remains backwards in terms of infrastructure and standard of living, despite the huge amount of money made from oil-exploitation in the area.

Mr Akpabio said he was not proud, personally, of the commission’s scorecard, and that as a supervising minister he was determined to get the place to work for the good of the people.

The minister said the NDDC has been noted for substandard and abandoned projects.

“We currently have about 12,000 abandoned projects across the nine states of the Niger Delta. If those things were completed, you can imagine that the area would have been turned into an Eldorado,” he said.

“There is no way NDDC road can last (for) even two years,” he said.

“I think people were treating the place as an ATM, where you just walk in there to go and pluck money and go away, I don’t think they were looking at it as an interventionist agency.”

Mr Akpabio, a former senator and governor of Akwa Ibom State, spoke on how corruption and political interference have bogged down the NDDC.

“We have also had a lot of political interference, people have not allowed NDDC to work as it ought to, people coming with ideas not to move the region forward but to move their pockets forward. It has always been so.”

He said the situation of things in the NDDC justifies President Muhammadu Buhari’s recent order for a forensic audit of the agency.

“I believe by now, people would have realised that the president is justified in calling for a forensic audit of the commission.

“I wonder why the leaders in the past didn’t find it necessary to look into the activities of the NDDC, with a view to repositioning it. There is nobody that will be happy to see this kind of situation.

“I don’t associate myself with failures. I believe that if you are given the opportunity to serve, you must leave the place better than you met it.”

The minister vowed to change the fortunes of the NDDC and the region.

“Even from the time my name was announced by Mr President, chiefs from Rivers State and different areas, even in Ondo, were jubilating because they believe that change has come to the Niger Delta region.

“I believe that my appointment is as a result of the pain and the agony Mr President felt in terms of not seeing things on the grounds.

“I don’t like people to look at my lips, I’ll like them to look at my records. I am also from the Niger Delta region, and I had the opportunity of being a governor for eight years, and I did my best. Some of the roads I did 11 years ago are still functional till today, no potholes on them.”

He said the federal government has already terminated certain contracts they felt would lead to wastages in the commission and that he expects a fightback from people who did not want to see the system cleaned up.

He explained the steps he would take to reposition the NDDC.

“We will start with budgeting. The budgeting process in NDDC has been warped. When you have a project that should take N30 billion in a year and you go and put N5 billion (in the budget), it means you intend to complete that project in maybe six or seven years, and there is no regime that would have that kind of tenure.

“So we will start from budgeting, we will put money where we actually want to complete projects. We will not spread thin where we want to make sure every village has something and at the end of the year, they have nothing.

“We will look at the low-hanging fruits, what are the projects that are at different stages we could just get into and then commission for the benefit of the people?

“Almost 23 years after the started the headquarters of the NDDC by OMPADEC in 1996, NDDC is still paying rent. As at the last count, they are paying N300 million a year for the headquarters building in Port Harcourt and the rent may likely increase.

“I have given my words to Mr President that within the next six to eight months he will commission the 13-storey headquarters of the NDDC,” Mr Akpabio said.