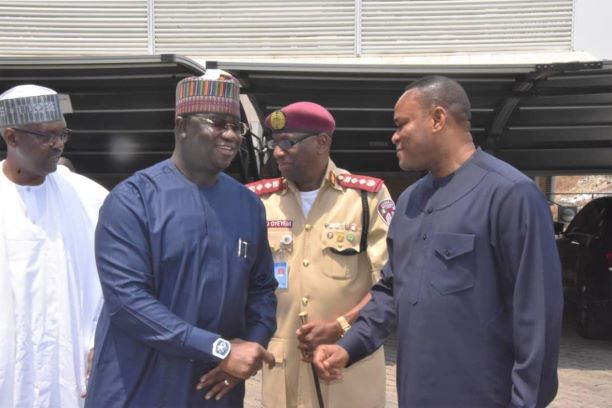 The Minister of State for Budget and National Planning,  Prince Clem Ikanade Agba,  has commended the Federal Road Safety Corps for its efforts in contending with disaster and safety management on Nigerian roads.
Prince Agba gave this commendation at the one day close out meeting and unveiling of the Nigeria Road Safety Strategy NRSS II (2019 – 2023) held in Thursday (March 12, 2020) in Abuja.
The Minister expressed concern that road crashes were fast becoming an epidemic recognized by the World Health Organization (WHO) and a key target for elimination in the United Nations Sustainable Development Goals (SDGS).
The Minister asserted that although the country had made tremendous commitments and progress in the implementation of the first edition of the Nigeria Road Safety Strategy (2014 – 2018), “each road death leaves families and friends bereaved with its own particular story, pain and misery.”
According to him, “every year, over 39000 Nigerians die from road crashes. In 2018 Global Status Report on Road Safety, the World Health Organization (WHO) estimated road traffic fatalities in Nigeria at 39802, while the estimated rate per 100,000 deaths stood at 21.4. These are not mere statistics but lives lost to road crashes.”
Prince Agba further said that the road crashes also included loss of human resources, drain on the national economy, as well as trauma and shock with negative effects on national development and an estimated GDP loss of about 2%.
The Minister stated that the Nigerian Road Safety Strategy (2014- 2018) was designed to respond to the mandate of the United Nations General Assembly Resolution 64/255, which declared 2011 to 2020 as a decade of action for Road Safety and African Road Safety Charter to reduce road traffic crashes in the country.
He further explained that the Nigerian Road Safety Strategy (NRSS) was an integrated Road Safety approach anchored on the five pillars of the United Nations’ decade of actions, namely: effective road safety management, safer roads, safe vehicles, safer road users and post-crash care response.
Prince Agba added that with the expiration of the first version of the strategy in December 2018, it became imperative for a review giving birth to the second edition which would run till 2023.
According  to him, “the plan holistically targets exploring avenues and strategies necessary for the prevention of the tragedies recorded on the Nation’s highways.”
The Minister commended President Muhamadu Buhari (GCFR) for signing the Executive Order 7 on Road Infrastructure and Refurbishment Investment Tax Credit Scheme in 2019.
He explained that  this was targeted to incentivize private sector investment in Nigeria roads across key economic corridors and industrial clusters among several other targeted interventions.
He urged all relevant stakeholders to support these laudable efforts and adopt the Nigerian Road Safety Strategy NRSS II (2019- 2023) so as to jump start immediate roads and road infrastructure revolution that would be unprecedented in the history of our country.
Please follow and like us: