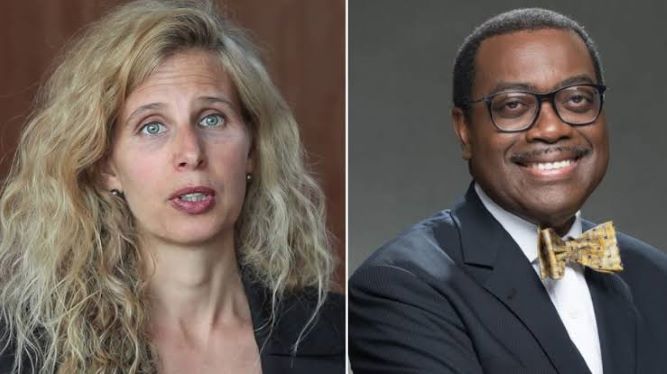 The Vice-President of African Development Bank (AfDB), Ms. Jennifer Blanke, has resigned and will be leaving the Bank effective July 4, 2020, according to a statement on Wednesday by AfDB.

Blanke joined the Bank in early 2017 and has overseen a number of the Bank’s key programs.

Her sudden resignation is coming amidst mounting pressure by the United States aimed at scuttling the second term bid of President of the Bank, Mr. Akinwumi Adesina. Adesina who is accused of engaging in corrupt activities has been exonerated by the Banks ethic committee and upheld by the Board but later caved in to US pressure to order independent review of the probe.

TheAmerican-Swiss joined the Senior Management Team of AfDB in 2017 and was appointed as Vice-President, Agriculture, Human and Social Development, with effect from 1st December 2016.

She is a renowned and globally respected development economist, with over 24 years of experience who before her appointment at the AfDB, was the Chief Economist and member of the Executive Committee of the World Economic Forum, Davos, Switzerland, where she provided global leadership on economic and development issues.

While announcing her planned departure, Blank commended AfDB boss Adesina, for his strong leadership and guidance, which noted has played key role in the transformation of the bank.

“I thank President Akinwumi Adesina for his strong leadership, guidance and support which have undoubtedly motivated and helped my team and I to play a key role in the transformation of the Bank. I feel privileged to have been given an opportunity to contribute to the Bank’s agenda for accelerating Africa’s social and economic transformation,” Blanke said.

The outgoing Vice-President added, “I am leaving purely for family reasons to rejoin my family in Switzerland, after a very fulfilling time at the Bank. I will miss the Bank and the excellent team we have built. I will continue to strongly support the Bank from wherever I am.”

Bank President Akinwumi Adesina said: “I have been delighted to work with Dr. Jennifer Blanke over the past three and a half years. She has demonstrated genuine leadership skills and moved the needles on so many fronts, especially in the areas of food security, women’s financial empowerment, and job creation. I wish her all the best and look forward to continued partnerships and engagement with Jennifer.”

One dies as Keystone Bank building collapses in Lagos