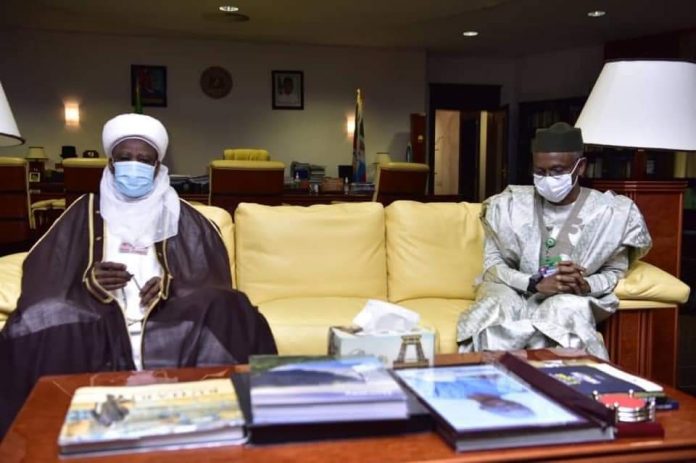 Governor Nasir el-Rufai of Kaduna state has said that the concern of his administration has always been to see people living together in peace because all human beings are equal and created by God.

The governor spoke with newsmen after a private meeting with the Sultan of Sokoto, Alhaji Muhammaad Sa’ad Abubakar, at the Sir Kashim Ibrahim House on Monday.

As he left Government House, the Sultan responded to media inquiries by saying tersely, “I came to visit my brother.”

However, Malam el-Rufai spoke briefly after seeing off the Sultan.

He said he welcomed the Peace and Reconciliation Summit which held at Zangon Kataf on Saturday, where Atyap, Hausa and Fulani communities resolved to live in peace.

He noted that the major religions “teach us to love for others what we love for ourselves. Therefore, we are happy with what the Chief of Atyap started. May God reward him for inviting all the ethnic groups under his chiefdom, to agree to live in peace and harmony.’’

The governor prayed that “let it be the beginning of lasting peace in southern Kaduna.’’

el-Rufai disclosed that the Sultan came to advise and guide him as well as to ‘’express his support for our efforts at bringing peace to Kaduna state.’’

The governor said that his relationship with the Sultan started when he was a student at Barewa College, adding that ‘’he knew me since I was 12 years old and he used to advise us on what we needed to do and how achieve peace and progress.”

According to el-Rufai, the Sultan expressed happiness that various religious and ethnic groups had suggested measures on how to promoted peace in Kaduna state.’’

‘’The Sultan also prayed to God to bring peace in not only in Kaduna state but Nigeria in general, especially the insecurity bedeviling northern Nigeria,’’ he added.

REVEALED: A Governor earns N700m monthly as security vote, yet no...

Obaseki’s response to Capt. Hosa is playing the Ostrich, By John...