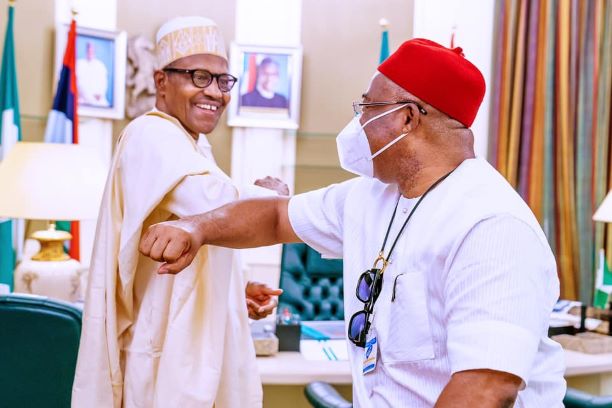 Imo State Governor, Hope Uzodinma, said he believed the emergence of the candidates for the presidential election in 2023 should not be on a tribal basis.
He stated this on Tuesday while briefing State House correspondents after a closed-door meeting with President Muhammadu Buhari at the Presidential Villa in Abuja.
“We are practising partisan democracy, not tribal democracy. So, the emergence of presidential candidates will come on a party-by-party basis, not tribe-by-tribe basis,” the governor said.
He made the comments against the backdrop of clamours by the people of the South-East zone that the 2023 presidency should be zoned to the region.
Some of them claimed that the region had been marginalised over the years in terms of development, adding that it had yet to produce a civilian leader since the late Nnamdi Azikiwe who was President between 1963 and 1966.
Lending his voice to the discussion on zoning the next presidency to the South East, Governor Uzodinma said he  believed that would only be determined by the leadership of various political parties.
According to him, the right thing to do was not to cause tension with the calls for zoning of the office of the president but to allow the internal mechanisms of the political groups make the best decision.
“If there are some other internal factors that will form part of the considerations for parties taking decisions, of course, that will be entirely the job of the leadership of those political parties and I think that is the right thing to do,” the governor said.
His position is in agreement with the opinion of a former governor of Abia State and Senate Chief Whip, Senator Orji Uzo Kalu, who visited former Military President, Ibrahim Babangida, and former Head of State, Abdulsalami Abubakar, in Niger State.
Senator Kalu had described the office of the president as an open basket for intending contestants, saying the idea of zoning was never constitutional.
(Slightly Edited ChannelsTV report to suit house style)
Please follow and like us: