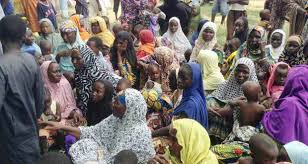 Borno Governor, Prof. Babagana Zulum, was in Diffa, Niger Republic, at the weekend, to arrange the repatriation of about 120,000 refugees to Nigeria.

The refugees, mostly from Northern part of Borno State, had trekked into Nigerien soil at the peak of the Boko Haram crisis a few years ago.

Mallam Isa Gusau, spokesman of the governor, said on Sunday that his boss’ visit to Niger Republic was to finalize the arrangements for the safe and dignified repatriation of the refugees to resettlement communities in Borno.

He said, about three weeks ago, Zulum had hosted a high-level meeting in Abuja, which had in attendance officials from federal Ministries of Foreign Affairs; Humanitarian Affairs, Disaster Management and Social Development; the National Commission for Refugees, and Internally Displaced Persons; and the National Emergency Management Agency to discuss repatriation of Borno citizens from Cameroon, Niger and Chad.

Gusau added that after the governor’s Abuja meeting, he travelled to Bosso, Garin Wanzam and Tumur, all in Diffa province at the weekend to meet the refugees’ host governor of Diffa, Isa Lameen, on modalities for the refugees’ repatriation.

“The governor led a delegation including the Speaker, Borno State House of Assembly, Hon.  Abdulkarim Lawan, among other top officials from the State Government,” Gusau said

According to Gusau, Zulum traveled to Diffa from Malam-Fatori, headquarters of Abadam local government in Northern Borno, which had been a stronghold of Boko Haram insurgents, until it was recently regained by the military.

He said the travel on Saturday to Malam-fatori, was the first time in more than five years by a civilian. The governor, according to him,  entered Diffa province in Niger Republic, the same day.

“The governor, while addressing top officials in Diffa, expressed his gratitude to government of the province, the federal government of Niger Republic and the host communities in the country for being hospitable to Borno citizens,” Gusau added

Gusau said the Borno Governor particularly thanked his host, Mr Lameen of Diffa province, for his empathy and compassion towards Nigerian refugees from Borno.

Is this a joke? Nigerians across social media platforms ask as...

Magodo GRA residents cry out to Sanwo-Olu to save them from...

2023: PDP will place more value on results than big names...

CoAS assures wounded officers and soldiers of commitment to their welfare