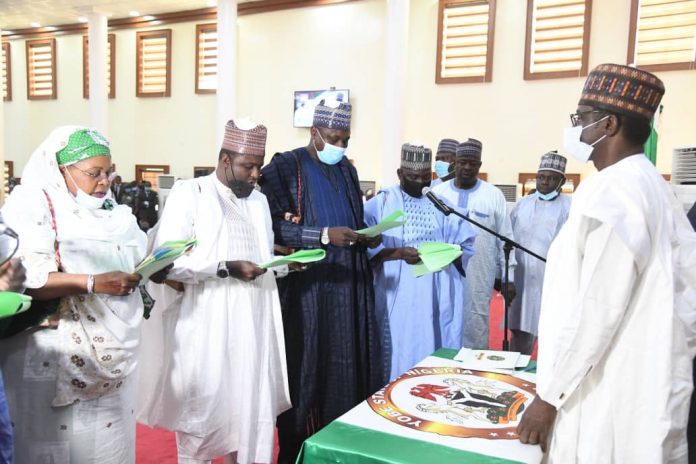 Chairmen and councilors were on Wednesday sworn into office in all the 17 local government areas of Yobe State.

The swearing in of the chairmen and councilors, all winning their elections on the platform of the All Progressives Congress (APC), cemented the party’s hold on the state.

The hold of the party was further made strong by the welcoming into their fold of four major stakeholders in the opposition Peoples Democratic Party (PDP) who defected on Wednesday.

The new members who were led by the Deputy Governorship candidate of PDP during the last election, Baba Abba-Aji were ushered into the APC during the swearing in of local government chairmen and councilors on Wednesday.

Speaking during the ceremony, Yobe State Governor, Alhaji Mai-Mala Buni, said: “We have in this election seen the excellent working synergy between the state government and the good people of Yobe state in the onerous task of building a strong democracy and bringing it closer to the people.”

He said: “The council election had further demonstrated the growing political maturity in our people where members of the opposition party turned out en masse to vote and elect chairmen and councilors of their respective local government councils although their parties did not field candidates.”

He said the participation of the opposition parties in the electoral process was an indication that APC had in the election fielded the right candidates for the right offices.

He said: “Therefore, the investment of the people’s trust in you, is a huge challenge that requires you to live to the responsibilities of your offices. You must strive to be above board to deliver dividends of democracy to all communities in your local government areas. It is said to whom much is given; much is equally expected.”

He promised to support them in achieving the best for the people of the state who have so much trust in them.

He asked them that: “As you assume office, you should focus on areas that would improve your Internally Generated Revenue and ensure remittance of same into government coffers. You should, prioritize your projects and programmes and, avoid incurring huge expenditure on non-essential items.”

Buhari felicitates Oshiomhole at 69, urges him to inspire others to...

NCC to end use of pre-registered SIM cards in Nigeria