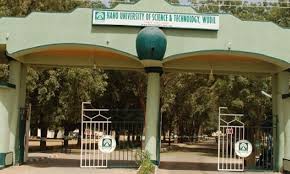 The Federal Government has pledged to support the Kano State University of Science and Technology (KUST) with projects valued at N2.5 billion.

Vice-Chancellor of the university, Prof. Shehu Alhaji-Musa, said on Tuesday in Wudil, Kano State, that the projects would be facilitated by the Federal Ministry of Agriculture.

He made the declaration while handing over eight projects, including lavatories, provided by the Tertiary Education Trust Fund (TETFUND) to user departments at the university.

Prof. Alhaji-Musa said the support would assist the university to improve on facilities at its Department of Agriculture.

The vice-chancellor listed the projects to include three lavatories, four departments and a faculty, stressing that the construction of additional departments were expected by the Ministry of Defence.

He said that the lavatories were for use by students and staff members to
improve the level of their conveniences.

He added that the lavatory projects, which were part of the TETFUND 2017 interventions, would be solar-powered with 24-hour electricity and water supply.

“The coming of these departments will complement our efforts and commitment at improving the agricultural sector and producing learned graduates,’’ he said.

Prof, Alhaji-Musa said that the newly-constructed Department of Plant Science was part of the 2014 TETFUND special impact intervention at the university.

“Another project that we handed over is the Faculty of Engineering complex (Phase One) and we are planning to begin the construction of a 1,000-capacity theatre hall,’’ he said.

The vice-chancellor noted that the university had benefited with 87 projects by the TETFUND and other development partners in the past seven years.

He added that not less than N328 million was spent by the state government on the procurement of working equipment for the university. (NAN)

Breaking: UFC 261: Kamaru Usman knocks out Masvidal in second round