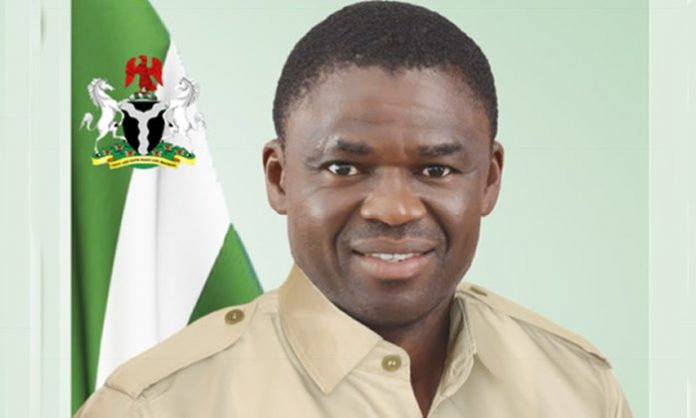 The subject matter of this piece as adumbrated in the title is one that is writ-large among the people of Uzanu and Igiode, two neighbouring communities in Etsako East Local Government Area of Edo State, which had contended with each other over land matters at a point, gone to court to thrash out issues and returned to embrace peace and had been living in peace until 2019 when the Edo State Government reopened an already settled matter with a controversial boundary demarcation exercise.

As far back as about four decades ago, there was a conflict between the communities over land, which became a subject of litigation. The court judgments at both the High Court and the Court of Appeal were in favour of Uzanu community. There is a claim that has not been rebutted that the Igiode community headed to the Supreme Court to seek to set aside the verdict of the Court of Appeal, but when it saw the futility of the action, it embraced out-of-court settlement with the Uzanu community.

The out-of-court settlement agreed by both parties in the terms of the judgments delivered by the High Court and the Court of Appeal, having enjoyed the concurrence by the Supreme Court, circumscribed the matter as res judicata and therefore not subject to litigation again between the same parties. It was also not to be revisited by the communities or by any human or governmental orchestrations.

But the matter has now been reopened and the finger is pointing at the Edo State Government for its official impunity in revisiting a matter that had been conclusively settled. This is the point that the Uzanu Community made clear in its petition, dated April 30, 2021 to the acting Inspector General of Police and in which several relevant offices were copied. The community alluded to the State Government’s continued “naked power abuse” against it “contrary to and at variance with judicial verdicts when in conjunction with the Igiode community, the State Government sought to invent and stoke communal crisis by the making of Gazette No. 25, 2019 in whose preamble, it was thus mischievously stated: “That since Igiode Community was the one that gave Land to Uzanu in the first instance, its claim to its boundary with Uzanu to run from River Niger through to Afa- Ogwoyo Road to Km 30, to Omonofa River, Railway line at the point marked (Point IG 2) up to Upa River (Point IG 1) to Iviebua Uzanu Upa road down South as indicated in the Survey Map be adopted and accepted.”
But read the Uzanu Community’s assertion: “It is on record that the land dispute between Igiode Community and Uzanu Community and the scornful claim that Igiode gave Uzanu land to settle were resolved judicially since 1973 as follows: ‘I find as a fact that the Uzanu people did not beg the Igiode for a parcel of land on which to settle, and that the Igiode people did not give the Uzanu people the land they alleged they gave to the Uzanu people to settle on. I also find as a fact that the Igiode people and the Uzanu people lived, at two distinct places. Having regard to all the points I have touched in this judgment; the plaintiff has failed to establish his claim against the defendant’. (Judge M.O Eboh Mrs, High Court of Auchi Judicial Division, 10th August 1973.)
“The above findings and decision of the High Court of Edo state were subsequently affirmed in the appellate Court, December 1981, as follows: ‘It is my view that all the grounds of the appeal as argued by the counsel to the Appellants lacked substance and cannot succeed. In the result the appeal fails and is hereby dismissed by me with costs assessed at N200 against the appellants”. (Justice Omoigberai Eboh, Federal High Court of Appeal, Benin Judicial Division, 3rd December 1981.)”
If it was then true that the two communities subsequently accepted the said judicial decisions in their various communal resolutions to live in amity and had, in fact, in accordance, maintained peace ever since, until the Edo State government began to use the Igiode Community to contrive a non-existent crisis between the communities, then it stands to reason that there must be some reasons the government is doing so and promoting conflict in the process. Whatever the considerations were, one thing is now very clear: they cannot escape essential indictment as being politically motivated.

In their attempts at deepening the animus and settling political scores with a prominent son of Uzanu community and Minister of State for Budget and National Planning, Prince Clem Ikanade Agba, the State Government has deployed the Deputy Governor, Phillip Shaibu in dealing with the renewed, nay contrived land conflict between Uzanu and Igiode.  But my take is that the original sin of the Uzanu community is the fact that it has a son who is distinguished and strategically positioned in the Federal Government to facilitate a few things in service of the community and its people.
For the Deputy Governor and his cohorts in the State Government, Agba’s visibility and rising profile must be upended. They have made this a top priority.  The neutralization of Prince Clem Agba in the politics of the state especially now that he is the only Edo North man standing with a significant ministerial appointment at the federal government is a task, they have committed to achieve. To achieve the enterprise, the Deputy Governor, and his co-travelers, sauntering on the path of perfidy, have continued to unravel as dictators in a supposed democratic milieu. It is the burgeoning dictatorship that has exposed the Deputy Governor and company as a bunch of desperate politicians who are using the instrumentality of government to pursue personal vendetta and work on some power grab schemes in 2023/2024.

In the onslaughts against Uzanu Community by the State Government, Agba has been the ultimate target. The dethronement of the head of the Uzanu Clan and the revocation of the clan by a recent pronouncement of the state government were meant to draw him out into the fray, ignite crisis between Uzanu and Igiode, heat up the polity and set the stage for his (Agba’s) ministerial appointment to be determined by the federal government.  Once Agba is taken out, the elements against his interest in government, who have been insinuating him into a senatorial or governorship project as the next step after ministerial outing, would gladly go back to sleep.

But to their discomfiture, Agba’s decision to demonstrate a high sense of equanimity has unsettled their strategy. The minister has ignored their mischief and shenanigans by focusing on his job in Abuja.  He would not allow the Deputy Governor and his cohorts to distract him.  His attitude to the issue, as can be deconstructed so far, is that the matter should be dealt with at the communal level by the Uzanu Community. Besides, the Uzanu community is in court to challenge the boundary demarcation and the consequent Gazette on it.

The strategic decision by Agba to stay away from meetings called by the deputy governor on issues that had been settled by the courts and the one (boundary demarcation and the Gazette) which is before the court courtesy of the Uzanu community has helped to insulate him from direct attacks and embarrassment. As it is, the Deputy Governor is the only one in the marketplace doing a macabre dance, having fully unraveled as a demagogue and dictator. He is obviously looking very pathetic having failed to draw out the minister into the arena of conflict.
It is sad that in their desperate bid to strike at the underbelly of Agba, the Deputy Governor and his conspiratorial faction have demonstrated official impunity by detaining four leaders of the Uzanu community for weeks on some trumped-up charges.  They were handed over to the Police at a meeting in the Deputy Governor’s office when the Deputy Governor realized that the minister did not honour his invitation to attend the Uzanu-Igiode communities’ meeting. He said the minister wrote to explain that he was busy with some presidential assignments and therefore could not be present.

The Deputy Governor had wanted Agba to be present to enable him to activate whatever agenda he had perfected against him.  It is thus apparent who is fanning the embers of crises in Edo State. But the Uzanu community must be commended for remaining calm in the face of obvious provocations by conniving elements in the State Government. In their petition, they did the right thing by urging the Inspector General of Police to “set up an independent investigative panel to unravel the genuineness and otherwise of the allegations levelled against Uneme-Uzanu by the Igiode Community with a view to bringing the perpetrators to book in a timely manner, envisioned to douse the tension in both communities and to act as a deterrent to false alarmists, mischief-makers, anarchists and other criminal elements. The same Panel is expected to also painstakingly look into Uneme-Uzanu’s security concerns and threat to their existence as an independent community by the Igiode community and their cohorts.”

They also said that given the volatile nature of the current relationship and mistrust between the communities, “we use this opportunity to request for full protection of our communities by the Police in order to safeguard our lives and property” and “appeal to the Inspector General of Police to consider the immediate intervention on the release of our kinsmen unlawfully detained over the unfounded allegation in order not to thwart the fragile peace already existing between the  communities. If there is clear evidence of criminal acts proved against them, they should be charged to court immediately and accordingly in line with the laws of our land as against their wrongful continued incarceration.”

The Uzanu community also appealed to the Inspector General of Police to “make good his position by ensuring that a thorough investigation is carried out and justice served accordingly as any attempt to allow ongoing political interference and manipulations designed to pervert justice to fester will further aggravate the situation.” The community added in the petition: “Whilst encouraging our people to remain calm and maintain peace amidst these provocations and intimidations, we will welcome any genuine government or other well-meaning bodies attempting to peacefully resolve our dispute with the Igiode community. We make bold to say that we view Igiode as a neighbouring community as decreed by God Almighty and that it is in our mutual interest to live harmoniously. However, Uneme-Uzanu will explore all legal and judicial measures to vehemently resist any unwarranted gimmicks, evil machinations and conspiracies targeting our people, God-given resources, and our existence as a community.” The Uzanu community has been civil and self-restrained enough in the circumstance and should be commended for promoting peace in Edo.

APC congratulates Gambari on appointment as CoS