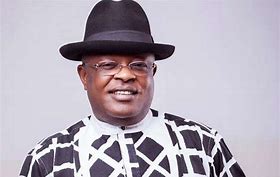 Ebonyi State Governor, David Umahi, has tested negative for Coronavirus alongside his daughter and three aides.

In a statement, Umahi said contracting the virus was not a death sentence.

He praised God for His grace and healing powers and thanked the people of Ebonyi State and Nigeria for their prayers and solidarity.

It would be recalled that Umahi and some of his close aides tested positive for the virus after carrying out the Corona virus test.

Although he disclosed that they did not show any symptoms, yet they had to be isolated in line with NCDC protocols.

The Governor had directed the Deputy Governor, Kelechi Igwe, to take over the frontline coordination of the state’s fight against the pandemic to protect Ebonyi people.

The Governor said he had no regrets as his government would never abandon the people at a trying period like now.

He appealed to the people of Ebonyi state to take the NCDC protocols more seriously while stating that he was working from home and that all his meetings would be through virtual platforms.

Togo, Benin, Niger did not pay a dime for electricity from...