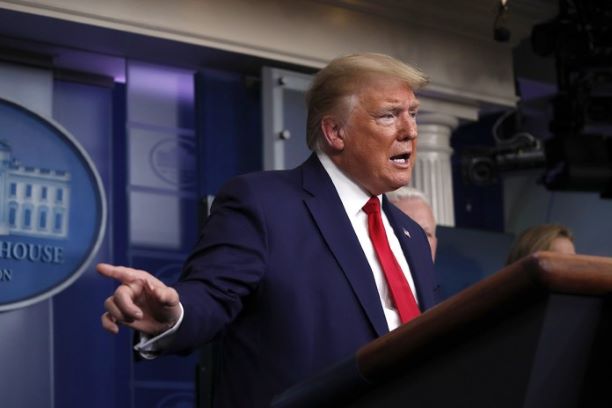 President Donald Trump said Wednesday that he has signed an executive order limiting immigration to the U.S. for the next 60 days due to the coronavirus pandemic.

“In order to protect our great American workers, I’ve just signed an executive order temporarily suspending immigration into the United States. This will ensure that unemployed Americans of all backgrounds will be first in line for jobs as our economy reopens,” Trump said, adding that he signed the order just before beginning his daily press briefing at the White House.

The order suspends new immigrant visas for 60 days, according to the text, which was released Wednesday. The order applies to people who are currently outside the U.S. seeking entry and do not currently have a valid visa, but does not apply to those people who are already lawful permanent residents or health care professionals seeking an immigrant visa to help combat coronavirus in the U.S., for example.

Trump said his order would issuing green cards — a mandatory stepping stone to citizenship — for 60 days and would then revisit the policy depending on economic conditions.

Trump also told reporters Tuesday that his executive order “will not apply to those entering on a temporary basis” and that his goal in issuing the order was to protect Americans from international competition for jobs. The president’s remarks suggested that people applying for green cards, whether from inside or outside the country, would be affected. But the move wouldn’t have an effect on existing visas.

His Monday announcement of the planned executive order came as a surprise, even to many Trump allies, and the sweeping language in his initial tweet raised questions about whom it would affect.

But without the text of the order or any formal guidance from the administration, it is not yet clear whether the order constituted a far-reaching policy change or simply formalized what is already a de facto pause on immigration during the coronavirus pandemic.

Citizenship and Immigration Services field offices in the country are closed because of the pandemic, and routine visa processing for tourists and workers around the world has been suspended. Restrictions are also already in place for nonessential travel. Refugee admissions have been halted, and the administration is cracking down at the border by turning migrants away. All of these measures have essentially amounted to a hold on immigration already.

Democrats have widely criticized the move, accusing Trump of seeking to distract from what they say are his failures in dealing with the coronavirus by scapegoating immigrants.

OPINION Coronavirus, Liberty, Life, Livelihood And The Threat Of...