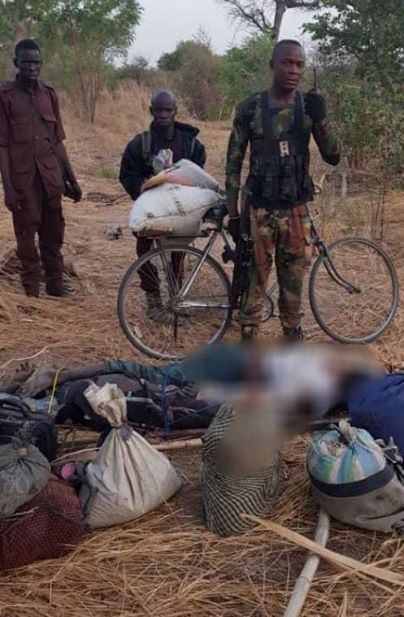 Troops from different Sectors of Operation LAFIYA DOLE (OPLD) have killed 11 Boko Haram Terrorists (BHTs) criminals and many others escaped with injuries in their area of operations.

He said troops of 121 Task Force (TF) Battalion under 26 TF Bde while in ambush position, made contact with BHTs at crossing point Pulka-Firgi road and one BHT was killed, One loaded AK 47 rifle recovered.

He added that a motorcycle painted in Military colour along with one locally fabricated Hand grenade was also recovered. 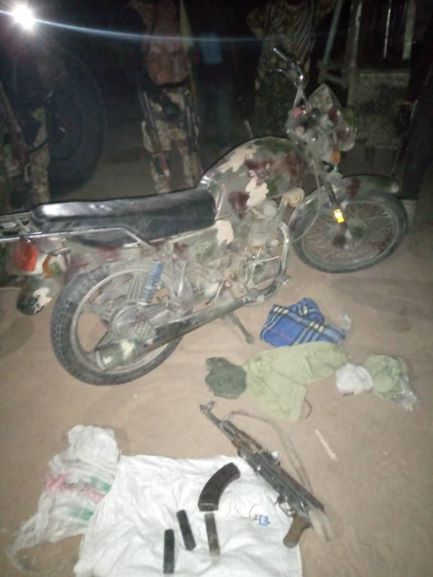 The Coordinator Defence Media Operations further said troops of 192 Bn of 26 Bde deployed at Gwoza, while on night ambush operations came in contact with BHTs attempting to cross through the Mandara mountains to Sambisa Forest and in the ensuing fire fight neutralised 2 BHTs while several others escaped in disarray with gunshot wounds while a bicycle and 2 copies of the Holy Qur’an with assorted clothing items were recovered.

He said on receipt of the information, the dogged troops swiftly mobilised and engaged the BHTs who fled due to superior fire power from the troops, adding that no casualty was recorded by own troops while 2 BHTs were neutralised.

Enenche said gallant troops of 152 TF Bn deployed at Kumshe under 21 Special Armoured Brigade (SAB) engaged BHTs in a fierce fire fight with the BHTs who attacked their location on 22 April, 2020.

He said one soldier paid the supreme sacrifice while another sustained gunshot wound in the process. He said 3 BHTs were neutralised, 1 motorcycle captured as others were suspected to have fled with life threatening injuries.

The Coordinator Defence Media Operations also revealed that troops of 151 Bn of 21 SAB conducted ambush operations along Firgi general area and made contact with BHTs. He said no casualty on own troops and 1 Ak 47 rifle, 2 motorcycles and 2 bicycles were recovered.

He said consolidating on the gains of the successes, troops of 152 Bn in another ambush operation on 26 April 20 made contact with BHTs food supply party near their crossing point at Miyanti. Enenche said the criminals were engaged, a soldier sustained minor injury while 3 BHTs were killed, 4 Carts conveying several food items and clothing were destroyed at the location.

He said while on general clearance operations within Sector 1 AOR, troops of 222, 151, 21 SAB Gar and 202 Bns under 21 SAB were led by the Garrison Commander 21SAB on clearance operations to Bula Shatane village 15 Kilometres from Bama and came in contact with BHTs who fled on sighting the ferocious troops advancing towards their location with heavy gun fire. He said the village was successfully cleared while all makeshift houses were destroyed.
The Coordinator Defence Media Operations further revealed 2 members of the BHTs came out from Bula Bello and Yerimari Gana and surrendered to troops of 21 SAB Garrison deployed at Bama. He said the 2 surrendered terrorists were handed over to 21SAB Military Intelligence Regiment.
According to him preliminary investigation revealed that the sustained military operations by land and air made them to surrender.

Enenche also revealed that a total of 19 IDPs arrived Army Super Camp 6 Bama from Jebe village. He said the IDPs were searched, screened and accommodated at own holding facility pending the conclusion of preliminary investigation. He added that were fed while the minors were administered with polio vaccines. 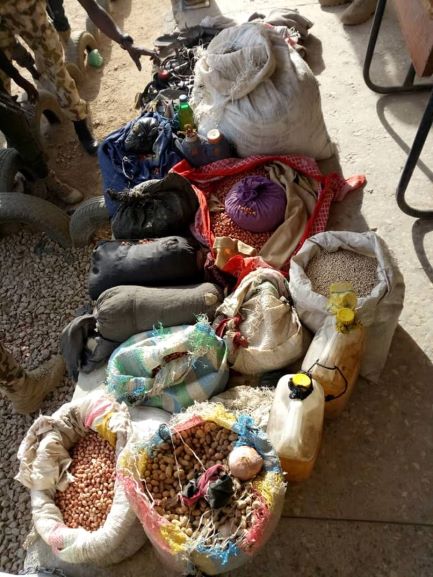 He said the Armed Forces of Nigeria remain resolute and highly committed to end the Boko Haram insurgency and requested the general public to continue to providing timely and credible information for the enhancement of their operations.