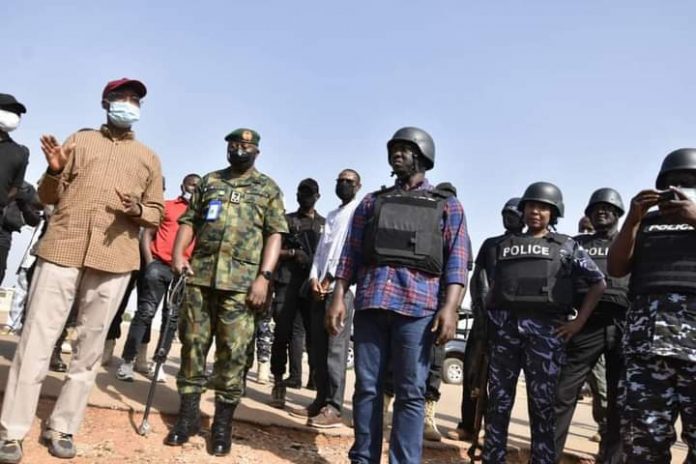 The military informed the Kaduna State Government of this development when heads of security agencies led by the Commissioner, Internal Security and Home Affairs, Samuel Aruwan, visited Sabon Birni on Sunday, on a confidence-building meeting.

At the meeting which had traditional, religious and community leaders drawn from the Sabon Birni general area, Aruwan said: “We are here on behalf of Governor Nasir El-Rufai to commend troops who successfully foiled coordinated attacks by bandits on Saturday night.

“The troops showed bravery and courage in securing communities in the general area. We are here to thank them, and to ask for more from them.

“From your end, we solicit support and cooperation for troops and all the personnel working here. We have to work together because security is participatory, involving government, security agencies and citizens. Citizens are at the center of these efforts.”

In his remarks, the Director, Department of State Services, Idris Ahmed Koya, charged communities to double engagement with security agencies through information sharing.

The Deputy Commissioner of Police in charge of Operations, DCP Ibrahim Abdullahi, in his response reiterated the position of Kaduna State Police Command and the military in taking the fight to the bandits in their hideouts.

As the delegation returned to Kaduna, DCP Abdullahi took journalists round the Rugar Bello Junction on the Rigasa Link Road where he debunked the insinuation that some train passengers were kidnapped on Thursday night.

According to him, the Kaduna-bound train from Abuja had not even arrived the station as of the time an attempted attack by bandits was repulsed.

Buhari extols General Dogonyaro, describes him as “a thoroughbred soldier”

CBN votes N500m for recycling of old Naira notes, others

Enemies are desperate to plant seeds of discord in Presidency –...