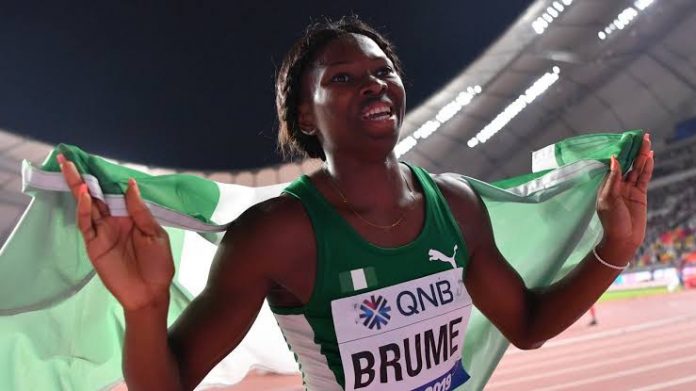 Ese Brume has won the first medal for Nigeria at the ongoing Tokyo 2020 Olympics.

Germany’s Malaika Mihambo soared to gold in the women’s long jump, snatching victory from former champion Brittney Reese with her last leap of the competition.

Mihambo was lying in the bronze medal position ahead of her final jump, but powered down the runway to register a season-best jump of 7.00 metres.

That left 2012 Olympic champion Reese – who had led the competition with a best jump of 6.97m – with one final attempt to reclaim the lead.

But the American could only manage 6.84 with her last leap to settle for silver.

Nigeria’s Ese Brume took the bronze medal with a best jump of 6.97m.

The 25-year-old Brume won bronze at the 2019 World Championships in Doha.

Having jumped a distance of 7.17m at the Chule Vista Festival in California in May, Ese had shattered Chioma Ajunwa’s 25-year long jump record of 7.12m.

Brume’s jump was the World Lead going into the Olympics.

She was the only Nigerian athlete who reached the final of her event at the 2016 Olympic Games in Rio, where she placed fifth with a leap of 6.81m. (The Punch)

Just in: By 52 to 28 votes, Senate rejects electronic transmission...