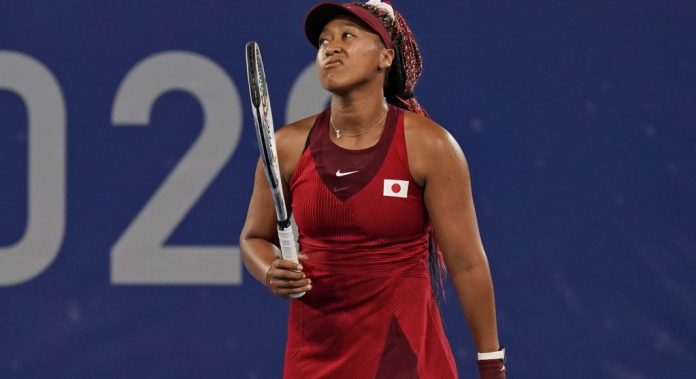 Marketa Vondrousova pulled off a huge upset on centre court at the Olympics, knocking out top seed and home favourite Naomi Osaka in straight sets.

Vondrousova will play Argentina’s Nadia Podoroska or Spain’s Paula Badosa in the next round.

Naomi Osaka is effectively out of the Olympics after losing in straight sets to Marketa Vondrousova.

The 23-year-old was the highest seed left in the tournament and did have her sights set on a gold in her home Olympics.

But the swagger Osaka showed in her first two matches at the Olympics was nowhere to be seen in the opening games as Vondrousova secured a double break early on.

Osaka was as sloppy as Vondrousova was clinical, with the Czech’s backhand returns causing all sorts of issues for the home favourite.

Only 13 minutes had passed, but Osaka was 4-0 down and struggling to find the line and her angles, racking up nine unforced errors – the world number two would finish with 32.

Vondrousova was then on the verge of the triple break with two break points, but Osaka fought back to hold serve and get on the board for the first in the match.

But the Czech was unfazed by the minor fight-back, winning the next two games with the help of two perfectly executed dropshots.

The first set lasted just 25 minutes and Osaka was now facing an early exit from her home Olympics.

Vondrousova pulled out her signature dropshot again in the first game of the second set, but this time Osaka was able to read it, reach it and win the point.

As Osaka appearing to finally click into gear, she upped her defensive game and broke Vondrousova for the first time in the match.

Osaka hit her first ace in the next game, but continued to face pressure on her service game, especially on her second serve which Vondrousova appeared to have little issues reading.

Vondrousova, world number 42, made Osaka pay for more sloppy shots, levelling the set by breaking her opponent in the fourth game.

After back-to-back double faults, Vondrousova dug herself out of a hole with two more masterly disguised dropshots.

With a 4-3 lead, Vondrousova was back in the driving seat and Osaka was left staring in disbelief at some of the shots the Czech pulled off.

Osaka defended the match points, but couldn’t stop her rival from winning the next game and the match in the process.

Elsewhere, on Tuesday, Stefanos Tsitsipas is through to the third round of the Olympics after a stellar 6-3 6-4 straight sets victory over Frances Tiafoe.

With the rain delaying play across tennis on Tuesday, the centre court’s action continued as scheduled with the roof closed.

Tsitsipas broke his opponent at the first time of asking after a bizarre service game for Tiafoe.

The American was 40-0 ahead before crumbling and then handed Tsitsipas the game with an unforced error from an easy overhead shot.

The Greek raced into a 3-0 lead and applied the pressure on Tiafoe’s serve again, but the American eventually saw off the challenge with a superb ace.

Both men were firing powerful shots from the baseline and there were several eye-catching rallies.

While Tiafoe looked good at times, Tsitsipas’ second shots off his serves were causing real issues as the number three seed too could often pick his spot.

Tiafoe produced a brilliant service display in the eighth game to keep himself in the set, taking just 59 seconds to make it 5-3 and did so without dropping a point.

Tsitsipas then had the chance to serve for the set and did just that with another composed and intelligent service game.

Tiafoe and Tsitsipas ended the set with the same amount of aces (3) and unforced errors (8), but the Greek was out in front in points won on serve with 72% compared to his opponent’s 64%.

Tsitsipas almost broke Tiafoe early in the second set, but an uncharacteristic error from Tsitsipas up close to the net gifted his rival the chance to hold serve.

The world number 54 though was not so lucky in his next service game as Tsitsipas hit some pinpoint returns to take a break lead in the second set.

Just as in the first set, Tiafoe was just about hanging in there before Tsitsipas stepped on the gas. The world number four raced through his next service game without dropping a point. (EuroSport)

NUC approves closure of all universities In Nigeria over Coronavirus