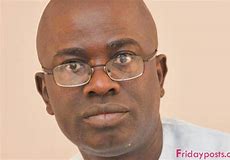 In 2003 or thereabouts, while still living in Lagos, I was invited to the Bournvita Award for Teachers ceremony to read the awardees citation along with Mrs. Adesuwa Onyenikwe of the Nigerian Television Authority (NTA) fame. Veteran actor, Mr Olu Jacob, was also there, as he said, to give moral support to his wife, the effervescent Joke Silva, who compered the event. In the course of our conversation about the loss of value in our society, Jacob remarked that in Nigeria today, when a neighbour with no visible means of livelihood suddenly becomes a billionaire, questions are never asked about the source of his wealth. “The next thing you hear is someone saying, ‘see that man who was living in a Face-Me-I-Face-You house two years ago, see how God has blessed him”. Jacob then looked to the sky with his hands raised to dramatise his next line: “Oh God! Where is your face?”

The result of that disposition came to light last week in the United States when an unprecedented 252-count federal grand jury indictment was filed against 77 of our nationals, allegedly for participating in a massive conspiracy to steal millions of dollars through a variety of fraud schemes. Most of these men are known and their videos, depicting debauchery, are now trending on the social media. But before I make my point, let me also highlight some issues that I consider very important.

One, under the law that operates in the US, these Nigerians are deemed innocent until a trial results in their conviction. The only comfort is that the FBI is not like our criminal investigation agencies that arrest before looking for evidence to prosecute. America is a country of law and FBI investigations are painstaking and thorough. Even at that, the FBI can make mistakes so it is possible that one or two persons on the list may be innocent. Since the justice system in the US is supposed to protect the innocent as well as punish the guilty, it is important that we do not rush to judgement concerning the suspects.

In 2013, following an internal investigation into cases in which microscopic hair analysis was used, the FBI, in collaboration with the Department of Justice (DOJ) and the National Association of Criminal Defense Lawyers (NACDL), admitted that 26 out of 28 FBI agent/analysts provided wrong statements or laboratory reports riddled with errors. The review was carried out after three men who had served prison terms were exonerated by DNA testing in cases in which three different FBI hair examiners provided testimony. The report also revealed that defendants in no fewer than 35 of these cases had received the death penalty. Nine of these defendants (who could have been innocent) were executed before the report came to light. Five died of other causes on death row. So, it is important to give our compatriots the benefit of the doubt until they are convicted.

Two, cybercrime is not peculiar to Nigeria and many of our nationals are victims too. In August 2016, Cybersecurity Ventures predicted that cybercrime will cost the world $6 trillion annually by 2021, up from $3 trillion in 2015. This, according to the report, “represents the greatest transfer of economic wealth in history, risks the incentives for innovation and investment, and will be more profitable than the global trade of all major illegal drugs combined.” So, this is a huge global crime. Our notoriety as a nation derives from the fact that thousands of semi-literate Nigerians have entered this nefarious business with the intent to ‘hammer’ with their ‘I do not come to you by chance’ letters (every Nigerian must read that novel by Adaobi Tricia Nwaubani).

Three, one of the salient issues thrown up by the FBI list is the stupidity of ethnic stereotyping. I am delighted that some otherwise respected people who in the past derided some ethnic groups on account of the action of a few were called out on social media. Criminality has no ethnic identity. Attempts to tar an entire ethnic group with tendencies exhibited by a few within its fold is not only senseless but further threatens social harmony. It is important to remember that whatever goes round today comes round another day.

Four, given the nature of our criminal justice system where the bigger the crime, the higher the possibility of escaping justice, one can safely conclude that the Nigerian ‘Big Boys’ who are to face trial in America would be walking free here because they have money. From their lawyers to politicians and traditional authorities, there is a web of conspiracy that would ensure they regain freedom, after some sensational arrests. Investigations would be shoddy, the cases could go on in court for an eternity while these characters may end up in the Senate, being elected governors or even appointed Ministers!

Five, the Economic and Financial Crimes Commission (EFCC), especially under Mr Nuhu Ribadu (with Mr Ibrahim Lamorde as Director of Operations) fought this crime with a measure of success in the early days. Ribadu, for instance, secured conviction for Emmanuel Nwude, a former Director of Union Bank who stole $242 million from a Brazilian Bank between 1995 and 1998 by impersonating the then Central Bank of Nigeria (CBN) Governor, Mr Paul Ogwuma. Several other ‘419’ kingpins were also tried and convicted while a number of their foreign victims got their money back. But the moment EFCC moved from economic crimes to ‘political crimes’, the commission lost the ball and the consequences are what we now see with many of our unemployable graduates engaged in “letter writing” to our collective shame as a nation.

Finally, there is a way in which we can connect this tragedy to the loss of values within our society. From drug trafficking in Singapore to prostitution rings in Italy to offshore armed robbery in the United Arab Emirates (UAE) and ‘419’ in America, a few of our nationals have helped to ensure that Nigeria is profiled the world over as a country of scammers. But if we want to be honest, we have also encouraged bad behaviour on our shores such that we are all complicit in this unfortunate characterisation.

As relatively young as some of us are, achievement and success were not measured by the possession of sudden wealth in the Nigeria where we grew up. Those with ill-gotten money were more or less ostracized by society. I recall farmers who put their corn by the roadside for passers-by to pick and pay. Nobody would dare try such things again in any of our villages. Don’t let us even go to the towns and cities where the ethos is to ‘make it at any cost’. That then brings me to the videos that are currently trending. Can anyone with legitimate sources of income behave in the manner these young men do? One put his small baby on top of bales of hundred dollar bills that cannot be less than a million dollars. Others can be seen throwing dollar bills into the air. Yet, nobody has bothered to ask them where they got the money.

Despite our claims to religiosity, nothing and nowhere is sacred in Nigeria anymore. I was in Sokoto last weekend for the wedding of the daughter of the Sultan. I could not count the number of prominent people whose mobile phones were stolen, either inside the Mosque or while trying to enter. We can argue that these are opportunistic thieves that you find in all countries but I also observed something that speaks to the peculiarity of our situation: Almost every big man was holding his pair of shoes rather than leave them outside. That elicited a joke by the Catholic Bishop of Sokoto, Matthew Hassan Kukah with whom I sat at a corner inside the Mosque alongside JAMB Registrar, Prof Ishaq Oloyede, Stabilini chairman, Dr Wale Babalakin, SAN, and the Magajin Gari of Sokoto, Alhaji Hassan Ahmed.

Bishop Kukah recounted the story of a church service where a female parishioner seated in one of the front rows danced to the altar only to return and find her purse gone. As Kukah said, the church and mosques attract attention because of their sacredness. But, he also added, if thieves had a sense of sacredness they would not be thieves in the first place. The bigger challenge is that we have encouraged a situation where people take what does not belong to them without any consequence. And that explains the perfidy we are witnessing in government at all levels.

The virtual collapse of the moral frame of our government mirrors other fractures in our society. There is an absence of a commonly held national moral code. We have failed to build a nation with a community of values that transcend our diversity. While a certain primitive tribal moral code sees those who steal public money or become billionaires through identity theft as heroes, the ethics of accountability is averse to such acts of corruption. Yet, once those who ‘hammer’ through Yahoo or steal from the public treasury cross into their ethnic territory, they acquire immunity from opprobrium.

While Nigerians tend to see public funds as belonging to no one in particular, the matter of cybercrime is even more worrisome. In the thinking of the typical Nigerian cybercriminal, the victims of their nefarious activities are some anonymous foreigners. They may not even see themselves as robbing anyone in particular. In the face of this apparent moral wilderness, all we have is our common nationality as citizens of Nigeria. On that platform, we have no choice but to insist on abiding by the dictates of civilized conduct and punishing crimes that violate both domestic and international law. On that account, Nigerians who export their criminal tendencies abroad must be prepared to face the consequences.

Unfortunately, this culture of dishonesty goes beyond financial crimes. A Professor of Law at the University of Calabar was recently demoted to the position of Graduate Assistant, following a recommendation of the university’s Academic Fraud Investigation Committee (AFIC). The lecturer did not have a first degree from the University of Abuja as claimed, never attended the Law School, holds a questionable Masters of Law (LL.M) degree purportedly obtained just two weeks after his first degree, parades a doctorate degree he does not possess and has no evidence of any academic publication. If such could happen at the University of Calabar, only God knows how many plumbers are ‘Professors’ of mechanical engineering in our private universities!

Given the foregoing, beyond the sanctimonious preachments by some government officials over the FBI list, the solution to the increasing moral anarchy in Nigeria is to urgently transform from a society of presumptions to one of laws. And it will take the right political will for that transformation to happen.

THAT “EBEANO” INFERNO IN ABUJA, By Tunde Olusunle

Biafra, Oduduwa Republic – ’liberation struggle’ as the new hustle By...