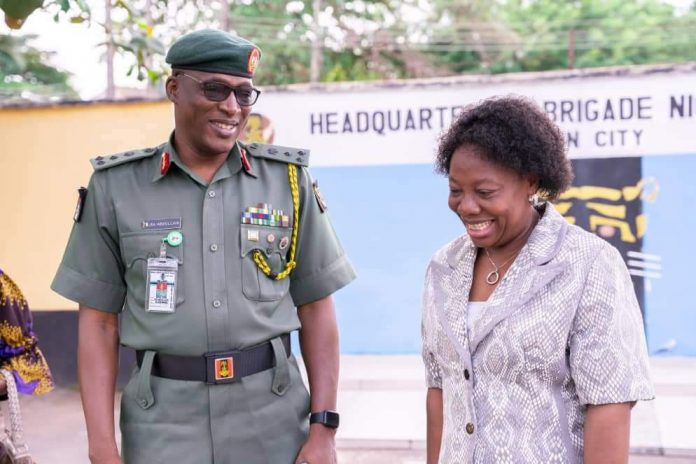 The Independent Petroleum Marketers Association of Nigeria Surveillance Limited; a subsidiary of IPMAN has pleaded with Nigerian Army for collaboration to check pipeline vandalism.

The chairman of the organisation Tosan Ailodion made this remarks, Thursday during his visit to the headquarters of the 4 Brigade, Nigerian Army, Benin, the Edo State capital.

He said the surveillance team was created by IPMAN to curb activities of vandals along the petroleum pipelines across the country.

He further stated that the activities of vandals are causing huge losses to the federal government.

Tosan expressed concern over incessant pipeline vandalism, especially in the South – South zone of the country.
He, however seeks the assistance of the Nigerian Army through the Commander 4 Brigade, Brigadier General Sani Abdullahi on intelligence sharing and surveillance of pipelines in the South-South region.

Responding, General Abdullahi said the Nigerian Army is ready to collaborate with any progressive thinking organisation in the area of security and protection of lives and properties; as this is in line with the Chief of Army Staff; Maj Gen Faruk Yahaya’s vision which is “to have a Nigerian Army ready to accomplish assigned missions within a joint environment in defence of Nigeria.”

During her remarks, she praised the army for her unflinching support towards the scheme since it was created.

She further sought for ways to sustain formidable working relationship that exits between the two organisations.

The Brigade Commander affirmed that the NYSC should expect nothing short of standard from the Brigade; especially in the areas of providing the scheme with worthy officers and soldiers for conservation of Discipline during NYSC Orientation Courses.
Presents during the visits were the Chief of Staff 4 Brigade, Colonel W Diriyai, the Garrison Commander 4 Brigade, Lieutenant Colonel TE Fakokunde and Assistant Chief of Staff 4 Brigade, Lieutenant Colonel KM Atilola.