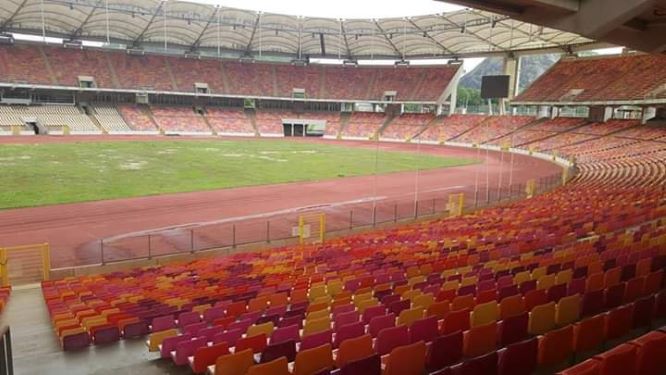 It was expected to be a tricky trip to Freetown for Super Eagles for the Match Day 4 of the next African Cup of Nations (AFCON) billed for Cameroon in 2022 just as the barren draw obtained by the Super Eagles was the best the team could get from the desperate Leone Stars of Sierra Leone .

Nigeria and Sierra Leone had last Friday played a thrilling 4-4 at Samuel Ogbemudia Stadium in Benin City, but this time round in a much less exciting manner.

With these two results, Nigeria earned just two points out of possible six although the 3-time African Champions still lead her Group with eight points, two points ahead the second placed Benin Republic.

Kelechi Iheanacho was the first to ask questions after eight minutes, but his effort was saved by Sierra Leone goalkeeper, Mohamed Kamara.

Samuel Chukwueze tried his luck at the quarter hour mark, only to see his ball kissing the upright.

The hosts had their glimpse at Nigeria’s goalkeeper Okoye Oduka after 21 minutes through Kei Kamara, but Oduka was up to the challenge.

Alhaji Kamara could have given the hosts the lead just before half time, but Okoye came to Nigeria’s rescue as the first half ended goalless.

Six minutes after the break, Chukwueze found Iheanacho whose shot went over. Iheanacho thought he gave Nigeria the lead at the hour mark, but his goal was ruled offside.

Iheanacho was always the man behind the Super Eagles’ danger, and eight minutes from time his effort from close range was saved by Kamara.

Nigeria raised their tally to eight points, one more than second placed Benin. Sierra Leone (3) and Lesotho (2) follow in that order.

Elsewhere, Egypt completed the double over Togo beating them 3-1 in Lome on Tuesday, to join Comoros on top of Group G with eight points each.

Mohamed “Afsha” Magdy and Mohamed Sherif scored in the opening half, while Mahmoud “Trezeguet” Hassan scored after the break. Yayra Josue scored a consolation for Togo two minutes into stoppage time as The Pharaohs made it two win in 72 hours over Togo, having won 1-0 in Cairo last Saturday.

Egypt coach Hossam El Badry made 7 changes from the lineup that started last Saturday game in Cairo, with midfielder Mohamed Elneny absent because of contracting COVID-19.

Togo had the first chance after 10 minutes. Kodjo Laba rounded Egypt skipper Ahmed Hegazy to go one on one with Mohamed Elshennawy but his shot missed the target narrowly. Two minutes later Gilles Sunu tried his luck with a header that went over.

Hegazy could have scored against his own team but for Elshennawy who saved his miscued header at the quarter hour mark.

But it was the visitors who took the lead after 18 minutes. Togo’s defense clearance found Afsha who quietly controlled the ball and scored past Malcom Danjuma to make it 1-0 to Egypt.

Elshennawy was there once again to save The Pharaohs when he stood tall to deny Sunu’s header from Matthew Dossevi cross. (PNO)

Peter Drucker And The Things That Changed, By Reuben Abati

My children and I now COVID-19 free, says Omotola Jalade-Ekeinde