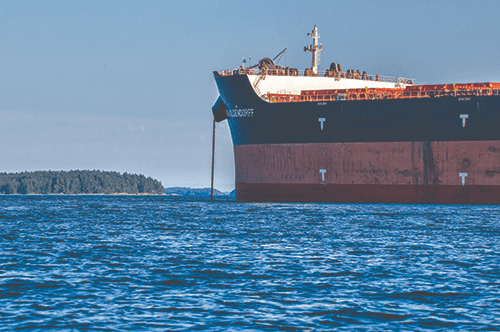 Nigeria is on the march again, marching to great infamy. At a time there is outrage across the country over the high debt profile that tends to mortgage her sovereignty, certain interests seem resolute to drag her further down.

Investigation reveal that Nigeria is at the verge of losing $195million, which is the value of the contract proposed for an Israeli-owned company, HLSI Security Systems and Technologies, Limited, to take over the Secured Anchorage Area (SAA), Lagos port, which was operated by Nigerian-owned Ocean Marine Solutions Limited (OMSL).

Sources disclosed that despite the fact that the SAA had been running successfully under OMSL for years at no cost to the Federal Government, some highly placed officials in government, for selfish reasons, are desperately rocking the boat. In fact, the champions of the agenda of stopping OMSL from operating the SAA are so determined that they resorted to blackmail while spewing out pathetic and spurious allegations against the operators of the SAA.

In October 2012, the Navy seized a foreign flagged ship carrying arms and ammunition on the nation’s territorial waters. At that time, insecurity in the maritime domain was rising. The insecurity prompted a series of intense talk among relevant government agencies such as the Nigerian Ports Authority (NPA), the Nigerian Maritime Administration and Safety Agency (NIMASA) and the Nigerian Navy (NA) on how to protect ships and the environment.
The OMSL argued that the insecurity had compelled foreign vessels seeking to berth in Lagos to stay outside Nigerian territorial waters up to a distance of 200 nautical miles where they believe pirates would not reach them or prefer to come into the country with foreign mercenaries for their safety. By so doing, Nigeria was losing businesses and huge revenue to neighbouring countries such as Benin, Togo and Ghana as foreign vessels found comfort in ports in those areas. Consequently, the OMSL was given the mandate to provide security for incoming ships through the SAA.
An impeccable said: “It is also on record that the intervention of OMSL not only reduced the heightened insecurity, but wiped it out, creating a safe haven for foreign and local vessels to berth and operate. The intervention of OMSL was, however, not automatic. It followed due process.
The source revealed: “In the first place, its pedigree as a result of successes recorded while being engaged by reputable firms caused the Nigerian Navy to introduce the company to NPA and NIMASA. The OMSL was subsequently invited to series of strategic meetings with stakeholders on how to provide security on the harbour approaches, and a deal was officially struck.
“The company went out of its way to provide the needed services by undertaking significant investment in the acquisition of assets and logistics backup required by the Navy to offer all round patrol services.”

For the Records Osinbajo: For kidnapping, banditry and all, justice must be seen to be done

“LESSONS OF FIFTY-ONE YEARS AFTER THE NIGERIAN CIVIL WAR ” – BEING PAPER BY AMB. GODKNOWS IGALI, AT A VIRTUAL CONFERENCE HELD ON THURSDAY,...