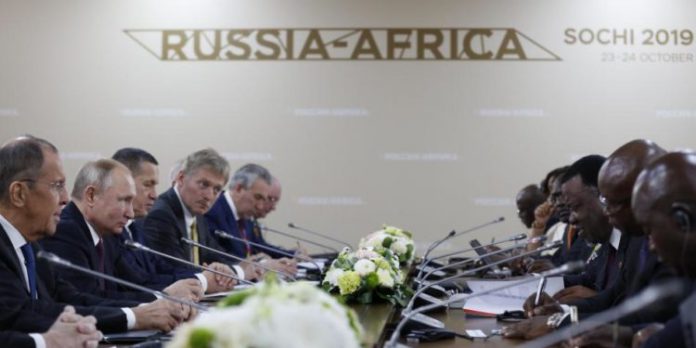 By the time the inaugural Russia-Africa Summit closed on Thursday afternoon in Sochi, Russia, president Vladimir Putin and his administration had signed dozens of memorandums of understanding (MOU) and other agreements with the African countries that attended.
The agreements include military cooperation, agricultural development, biotechnology, and oil and gas. They range from the minor, like Democratic Republic of Congo’s deal to sign data storage software, to more ambitious, like Ethiopia’s plan to build two 12,000 MW nuclear reactors.

Overall, Russia made big pledges across the two days in its effort to reestablish itself as a premier power on the continent and challenge China’s trade dominance. Russian trade with Africa has more than tripled to $18 billion in the past nine years, and Putin stated in his opening address that he wants to double that figure in the next five years.

Rwanda president Paul Kagame (L) and Nigeria president Muhammadu Buhari (R) at the Russia-Africa Summit in Sochi.But it’s unclear how Russia’s commitments will measure up when put up against the China’s deep foray into Africa especially over the last two decades. Ultimately, these Russia-Africa MOUs aren’t legally binding even if they do signal an intention to move forward with a contract.

China’s last Africa summit FOCAC, held in Beijing in September 2018, made ambitious promises and followed through on them, fortifying the Asian giant’s place as Africa’s biggest trading partner at $204 billion annually.

President Xi Jinping committed to $60 billion to back development projects and said China will also exempt some poorer nations from debt, increase imports from Africa, support the building of the continental free trade area, and give scholarships to young Africans.

Big deals to come out of past summits include a coal power plant in Egypt, the Mombasa-Nairobi railway in Kenya, the Addis Ababa light rail in Ethiopia, hydropower plants in Angola and Guinea, new headquarters for the African Union, and others.

But Russia’s economy, with a GDP of $1.57 trillion, can’t realistically compete with a Chinese economy more than seven times that size, and it remains to be seen how many of the MOUs it signed in Sochi will pan out. Some of the more tangible deals Russian ministers signed were in oil and gas, with Russian state-owned oil firm Lukoil signing memorandums with Nigeria and Equatoria Guinea.

The most ambitious memorandums announced were in nuclear energy. Alexey Likhachev, head of Russia’s state nuclear company Rosatom was bullishly optimistic about future cooperation, saying on a panel, “We can break through and make a quantum leap on the African continent.” So far, he said, Rosatom has signed memorandums and agreements to develop nuclear energy with 18 African countries, including Egypt, Ghana, Kenya, Zambia, Rwanda, and Ethiopia.

But the challenges to developing nuclear energy on the continent—including cost, skills training, security, and infrastructure—are many.

Rosatom signed a nuclear memorandum with Nigeria for the development of a plant in Akwa Ibom and Kogi states in 2017, but there has been little follow up. “We are ready to go as fast as we can with our partners,” Likhachev said.  We expect the decision from our Nigerian partners on the precise details of the cooperation that they are ready to take with us,” he added.

Rosatom is set to begin construction on a plant in Egypt shortly, and Likhachev said the next countries ready to go were Rwanda and Zambia, but both of those deals are still in very early stages. “We are waiting for the feasibility study that will give us the timeframe, how much it’s going to cost, and all that,” Rwandan infrastructure minister Claver Gatete told Quartz Africa. “It’s not something you finance in a day,” he added.

Still, Likhachev said he was encouraged by the growing interest in Russian nuclear energy and made his case to African ministers present. “There are almost no nuclear reactors on the continent, so it’s very important who is going to be the first, because they will dominate and lead the way,” he said.
Military cooperation is perhaps the quickest and most easily implemented sector. Russian-African military trade is currently valued at $12b and set to grow rapidly. Nigeria purchased 12 military Helicopters at the summit, and a handful of other countries like Central African Republic, Namibia, Madagascar and Uganda pushed for more tanks, planes, helicopters, missiles, rifles, and military advisers, raising alarms in Washington and Paris.

Despite Western protests, African states wholeheartedly embraced Russia’s return to the continent, arguing that it offered a host of new business opportunities. “Anybody who gets business going, either from the Russian point of view or the African point of view in the medium term will benefit from that process,” South Africa’s public investment minister Pravin Gordhan told Quartz Africa.
Ultimately, it comes down to how serious Putin’s ambitions are in Africa and whether Russia is ready to make the big cash investments it promised across multiple sectors.
In the meantime, African countries will have to wait and see. As South Sudan mines minister Gabriel Thokuj Deng told a panel that included Russia’s minister of natural resources and the head of its state mining firm Rosgeologia, “We are tired of signing MOUs. If you are serious, I am going to South Sudan tomorrow and I hope to see you there soon.”
Podium Media
Please follow and like us:

Another 77 abducted persons rescued in Katsina

Gas is a key potential for Nigeria’s economy, says Gbajabiamila