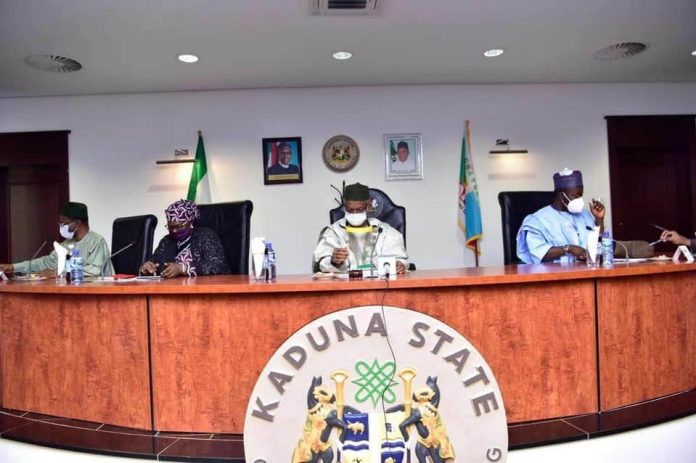 Senior security officials today briefed Malam Nasir El-Rufai on the security situation in southern Kaduna. They confirmed that a cycle of attacks and reprisals was compounding criminal activities in the area and causing needless loss of lives and appealed to all sides to embrace peace. The security officials thanked the Kaduna State Government for its continued support and disclosed that the FG is sending more forces and material to enhance the security presence in the area.

In his opening remarks at the meeting, Governor El-Rufai said he came to the meeting “with a heavy heart, saddened by the needless pain several of our communities are enduring in the cycle of violence that is recurring in parts of our state.”

Major-General CC Okonkwo, commander of Operation Safe Haven, told the meeting that he had received a deployment of Special Forces while the Chief of Defence Staff is also sending more troops to reinforce those in the area, to stop the communities from attacking each other, and to create the climate for peace talks. He assured that the military will continue to do its best to provide security.

General Okonkwo said that the attacks are not one-sided, contrary to what is reported in the media. He explained that the army is working to improve response time over the vast distances and dispersed communities and the difficult terrain of the conflict area. He noted that even a few days ago, some youths mounted an illegal roadblock along the Manchock-Kagoro road and had to be forcibly dispersed. He stated that having more boots on the ground will not mean having boots everywhere. He disclosed that they are expecting support from airforce platforms to increase response time.

The police traced the outbreak of violence to clashes that started on 5th June 2020 and resurfaced on 11th June 2020.

The security officials advised that as further steps are taken to secure the area, the government should also tackle incitement and fake news and ensure the prosecution of anyone arrested or indicted for the violence.

Earlier in his remarks, Malam El-Rufai enumerated the steps the government had taken over the last five years on its own and in conjunction with the Federal Government to reinforce security presence in southern Kaduna. “We answered the decades old demand for a permanent military base by working with the Federal Government to deploy a forward operating base of the Nigerian Army in Kafanchan. Our government purchased an estate to provide accommodation for a permanent mobile police squadron in the area. Also, deployed in area are troops from Operation Safe Haven and Nigerian Army Special Forces, complemented by two mobile police squadrons.

The core security meeting will reconvene next week to receive further updates on security actions and outcomes and track the implementation of suggested next steps.

Buhari pledges to support resolutions of AFLPM on peace and development,...

FG to clamp down on COVID-19 vaccination certificate racketeers, prosecute them