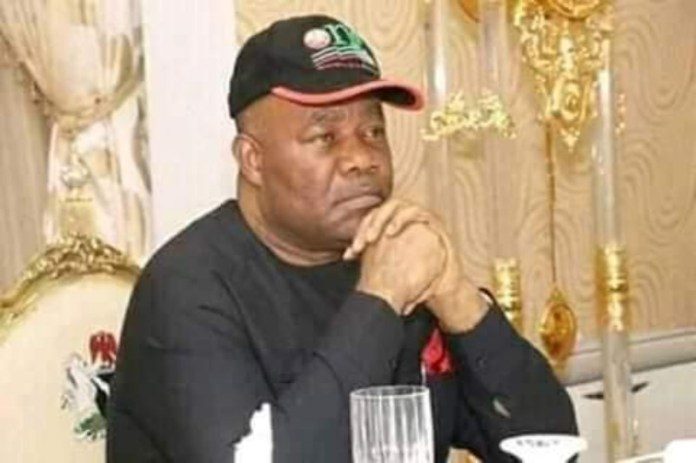 The group in a petition to the Presidency said Akpabio’s sack would steer the president’s anti-corruption war from jeopardy, as contained in a statement to National Accord.

It cited Akpabio’s alleged track records in corrupt practices and other high-handedness in office as governor of Akwa Ibom State.

The group in the petition, signed by Barr.Obot Michael and six others, said that Akpabio. who was petitioned before the United States Congress in 2012, over alleged corrupt practices, kidnappings and killings which affected 93 persons in Akwa Ibom, a majority of them from the Ibibio clan, lacked the morality to continue to remain as a minister of the Federal Republic.

The statement recalled how in 2012, the President of the Ibibio Peoples Union (IPU), Thompson Esien, before the United States House of Representatives Committee of Foreign Affairs, lamented the incrased incidents of kidnappings for ransom immediately Akpabio became governor in 2007.

Esien, according to the petitioner, had intimated the US House Committee on Foreign Affairs to the fact that a majority of the victims were political opponents of the former governor.

The petitioner stated that “During that period of the reign of terror perpetrated by Akpabio, to demonstrate his tenacity in seeking out those who opposed his tyranny, he attempted to persecute Nigerian-Americans residing in the US who decried his reported high-handedness in Akwa Ibom state.

“He sought frivolous injunctions in America’s judicial system to curtail freedom of speech of his perceived enemies who vocalized his misdeeds on the internet and other for a.

“Given these atrocities, the fact of the governor’s kleptomania with the states resources appears a more merciful behavior. Mr Esien had, in his petition, regretted that despite all the atrocities committed, the Federal Government has not acted to intervene in this dire situation despite pleas of victims.  The Federal Government’s non-reaction underscores the fact that the Niger Delta, as a minority region, is viewed as important only to the degree in which its natural resources can be exploited.”

Enumerating some of the atrocities committed by Akpabio while he was governor of Akwa Ibom State, Esien had, in his petition, stated “barely one month after assumption of office in 2007, Akpabio ordered the arrest and incarceration of a newspaper vendor, Mr Essien Ewoh, for distributing a newspaper publication, Fresh facts , that criticised the governor.

“The Publisher of Fresh facts newspaper, Mr Sam Asowata, was arrested in Abuja, tossed into the truck of a vehicle and driven all night to Akwa Ibom. Mr Asowata’s young daughter, who happened to have been in her father’s office at the time of the arrest, was also arrested on the orders of Governor Akpabio.

“When one Chief Ononokpono queried the governor as regards the financial accountability of his administration, Akpabio ordered his arrest and the octogenarian was remanded in prison and later died on December 7, 2010.

The CSSYGG, therefore, appealed to President Buhari to “investigate the atrocities committed by Akpabio as governor of Akwa Ibom state because from his records, he has the capacity to utilize his position as Minister of Niger Delta, which is a strategic ministry to breed militants and engage in activities capable of derailing the progress of the Niger Delta as he recently demonstrated through the setting up of an illegal committee to oversee the affairs of the NDDC, which is constitutionally not within his purview.”

ECOWAS moves to stabilize democracy in countries under threat of military...

Ortom challenges Akume to show his scorecard of service