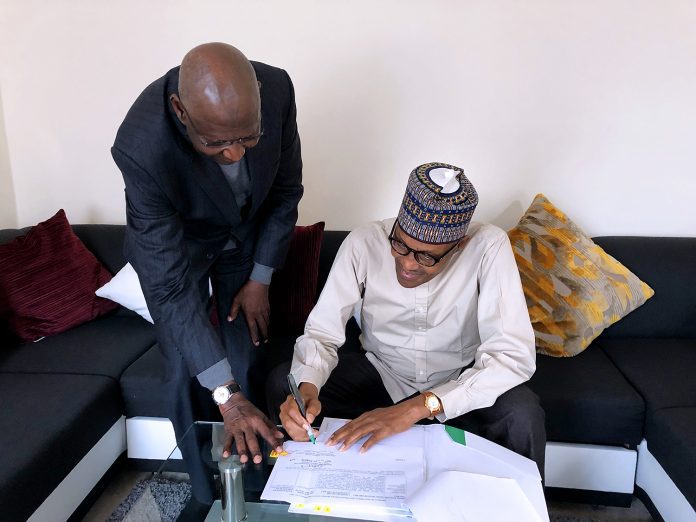 President Muhammadu Buhari can preside over Nigeria from wherever he is anywhere in the world, the National Chairman of the ruling All Progressives Congress (APC), Adams Oshiomhole, has said.

He made this statement during a courtesy visit to the Senate President, Ahmad Lawan on Tuesday.

His comments come on the heels of a backlash to the president for signing an amended Nigerian law in the UK where he is currently on a private visit.

Mr Buhari had embarked on a private two weeks visit to the UK. He did not hand over power to Vice President Yemi Osinbajo before his trip, indicating he would continue to exercise presidential functions from the UK.

Mr Buhari’s Chief of Staff, Abba Kyari, on Monday, flew to London to submit a new bill on offshore oil fields to the president for assent.

Many Nigerians condemned the move, wondering why taxpayer’s funds would be used to fly Mr Kyari to London for a function that could have simply been ceded to the vice president.

On Tuesday, while Mr Oshiomhole expressed satisfaction that the amended
Deep Offshore Act was signed into law in London, he said it shows the president can rule the nation from anywhere.

“I think by signing into law at the Nigerian House in London, it shows that wherever the president is, he is presiding over Nigeria and with the benefit of modern technology we have passed the Mongo Park era.

“So signing it in London for me has also made several statements. Namely, that wherever national interest is involved, the president is on duty and wherever he is he is presiding. I also salute his assenting to the Bill as fast as he did and even at the Nigerian House in London,” he said.

The party chairman commended the Senate for the way they passed the bill.

He also noted that while he was president of the Nigeria Labour Congress, he was “completely non-partisan” and attempts were made to amend the law but “the lobby group as represented by the IOCs, have appeared to be so strong that they have overwhelmed the National Assembly over the years.”

“On a lighter note, I will say that when the oil companies come lobbying, the entire environment can be quite oily and you know to walk firm on oily platforms is a statement of courage, integrity, commitment to national interest and your will to ensure that you put Nigeria’s interest first before any other consideration. Including even individual temptation,” he said.

He also commended lawmakers of opposing parties for their cooperation in the passage of the bill.

“It is this difference that I believe the National Assembly under your leadership across party divide has brought to bear. Nigerians ought to celebrate you… We celebrate the PDP members because we monitored the debate and there is no evidence that any party is divided. National interest was at play,” he said.