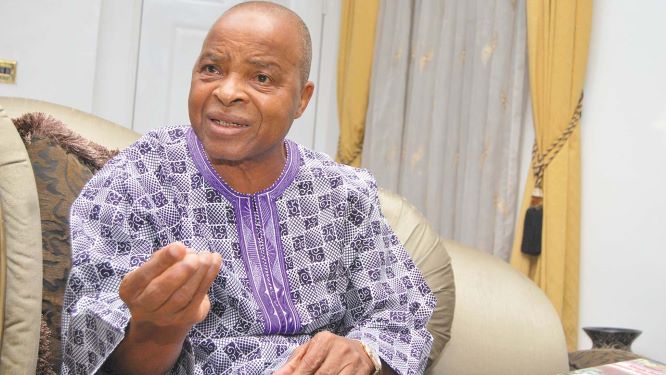 ▪︎Wants Amotekun to metamorphose into state police
By Richard Akintade, Osogbo
A retired military officer, General Alani Akinrinade, has stated that the efforts to secure the nation should be community’driven rather than using a centralized structure.
He also advised that all regional security outfits should metamorphose into state police for effective delivery in the security system of the nation.
He stated this at the weekend while assessing the general governance in the country in an interactive session with a team of Osun state Ministry of Information (Civic Engagement) led by the Special Adviser to Governor Adegboyega Oyetola on Civic Engagement, Hon. Olatunbosun Oyintiloye at his country home, Yakoyo, Ife North, Osun State.
He maintained that, “Policing system in every country is naturally meant to be driven through community structures for excellent and effective intelligence gathering which is the onus of security system.
“Central government should not exclusively control security institutions as other components, especially in a federation should be inclusive because of the essence of proximity in the policing system.
“The centralization of security system by  the federal government which brings about the enlistment of non indigenous personnel into the policing structure of a state as against the use of indigenous individuals like the case of foreign countries, has rendered Nigeria’s policing system ineffective and unproductive.”
Akinrinade, an elder statesman, emphasised the need for the federal government to embrace state police by giving the leverage to all regional security outfits such as Amotekun in the southwest, Hisbah in the north, among others, to metamorphose into state policing structures while saying that policing structure was a dynamic  phenomenon which must conform with contemporary circumstances.
He further statedd that that Nigeria as a nation must eschew any form of suspicion coming from the agitation for state policing, thereby recommending an institutional and constitutional mechanism, which would checkmate the arbitrary use of the state policing structures.
While reacting to the arrangement of community policing structure powered by the Nigerian Police Force as against the policing structure under thejurisdiction of state governors, Akinrinade, the illustrious son of Yakoyo, enunciated that a state should not be expected to use its resources to run a policing system, which was not exclusively under  its supervision, noting further that a state should be  allowed to use its resources for its own policing arrangement backed up by legislative enactments.
Akinrinade however, commended the restless efforts of Amotekun and other regional security outfits for taming the threats to security which had resulted in reduced level of kidnapping, cultism, cattle rustling, gangsterism among others in the country.
Commenting on the performance of Osun State Governor, Adegboyega Oyetola in office, Akinrinade described the governor as a man of proven integrity, known for personality moulded in patience, humility and high sense of service to humanity.
He equally extolled the ingenuity behind the team work which Oyetola involved in with other governors in South West that led to the creation of Amotekun Security Outfit, which was a response to the surge in insecurity threatening the peace and harmony Osun and the parts of the country were enjoying.
“We’re not disappointed in him for he has performed excellently well through his service driven leadership occasioned by his people-centered governance within about an half of his first term in office while it’s believed that the second half of his administration will even be more efficient and productive.
“As a leader with a listening ear who takes people’s demands and yearnings as imperative above any other thing, he (Oyetola) has been able to engender peace and stability in the polity by moving away from controversial policies which do not conform with the opinion poll,” he added.
Please follow and like us:

Minority caucus in NASS ready to move against Buhari (Plus Video)