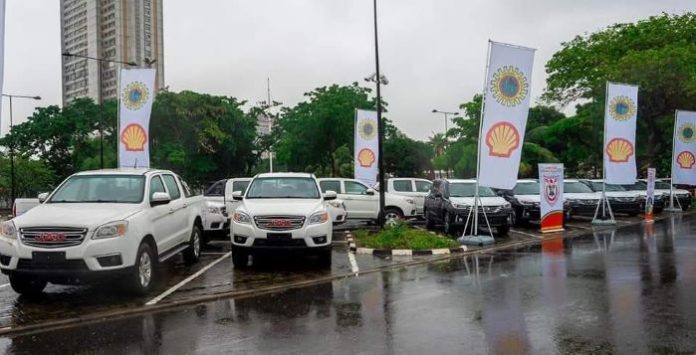 Lagos State Governor, Mr. Babajide Sanwo-Olu, on Wednesday, reinstated his administration’s commitment to the continued provision of adequate security of life and property of Lagosians, saying “it remains a major priority of his government.”
The Governor stated this at the State House, Marina, when he received 16 security operations vehicles donated to the Lagos State Security Trust Fund by the Nigerian National Petroleum Corporation (NNPC) and Shell Nigeria Exploration and Production Company (SNEPCo) to enhance policing and facilitate quick response time to distress calls in the State.
Speaking during the handing over of the security operations vehicles to LSSTF, Governor Sanwo-Olu assured SNEPCo that the vehicles would be put to good use.
He said the presentation of the 16 vehicles was in fulfillment of the promise SNEPCo made to Lagos State Security Trust Fund during a dinner held few months ago by Lagos State Government to seek support from the private sector.
He said: “We are excited because this is another confirmation of collaboration, another promise kept and another public private partnership that is working for us in Lagos State.
“A couple of months back, even way before COVID-19, we had met at a dinner where we asked and solicited for support from our private sector operators in Lagos and SNEPCo was present at that dinner and they humbly committed to providing something for the state.
“So this was a commitment that was made to us months back but we are indeed happy that despite the very difficult terrain all of us have gone through, they have been able to make it, together with their joint partners – NNPC, Exxon Mobil and other partners.
“They are doing this because we as a government have shown consistent transparency in how we deal with them. We have shown that each time they support us, the support gets to the people and we get to use it for what the support is meant for.”
Sanwo-Olu further assured the oil conglomerates that the State Government would continue to see them as development partners in the Lagos project.
“We have different roles to play but we will continue to collaborate. We can assure you that the men that continue to keep us save will get these vehicles.
“We will determine how they go round. But you can be assured that none of them will be kept in governor’s residence.
“It will go to the people that truly require them and they will be used for the reason for which they were given.” Sanwo-Olu said.
Speaking on behalf of NNPC, the Group General Manager of National Petroleum Investment Management Services (NAPIMS), Mr. Bala Wunti, said the presentation of the operations vehicles was to support the unrelenting effort of Governor Sanwo-Olu in keeping over 20 million residents of Lagos State and their properties safe.
Wunti, who was represented by Mrs. Clementina Arubi, also commended Governor Sanwo-Olu and his team for their commitment in the fight against COVID-19 in Lagos State, the epicenter of coronavirus in Nigeria.
“Today in line with our GMD’s principles of Transparency, Accountability and Performance Excellence (TAPE), which are to be delivered in safe and secure environment, leveraging technology and innovation, we are very proud to handover 16 security operations vehicles to Lagos State Security Trust Fund (LSSTF) to support the unrelenting effort of the Governor in keeping over 20 million residents of Lagos State and their properties safe,” she said.
In his remarks, the Managing Director of Shell Nigeria Exploration and Production Company Limited (SNEPCo), Mr Bayo Ojulari, said the presentation of the 16 security vehicles to Lagos State Security Trust Fund was to enhance policing and facilitate quick response time to distress calls, which are considered to be critical to crime prevention.
His words: “SNEPCo and indeed Shell Companies in Nigeria (SCiN) recognise the tremendous work the Lagos State government is doing to strengthen security in the state amidst limited resources. Our keen and constant evaluation of the state of our community always helps to identify gaps where we believe we can intervene to make a difference.
“In this instance, we recognise the need to support the government’s efforts in keeping the state safe, just as we have continue to support the state in two other areas- education and health. This, to a large extent, aligns with our priority of safety, health and development of our people and communities where we operate.
“Therefore, the 16 units of security vehicles being presented to the state’s security trust fund is to enhance policing and facilitate quick response time to distress calls which are considered to be critical to crime prevention.”
Ojulari added that his company would continue to work with the state to seek other areas of collaboration and partnership.
Also speaking, the representative of one of the co-venture partners, Exxon Mobil, the Senior Manager, Security External Relations of Exxon Mobil, Ide Owodiong-Idemeko, urged Governor Sanwo-Olu to “continue to do the good work he is doing to ensure that the people of Lagos State are secured and safe.”
Other members of the executive at the event include the Secretary to the Lagos State Government (SSG), Mrs. Folasade Jaji and the Executive Secretary of LSSTF, Abdulrazaq Balogun, among others.
Please follow and like us:

Nigeria: Still no justice for the 640 killed after Giwa barracks’...

“I want to be a martyr, sacrificed to achieve Igbo Presidency”...