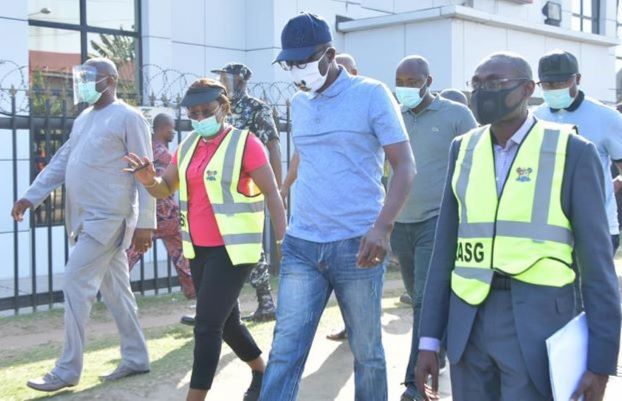 Governor Babajide Sanwo-Olu has appealed to all motorists plying the partially shut Third Mainland Bridge to be patience while meandering through the carriageways, as the Federal Government repairs the failed segments of the bridge.

He made the appeal to commuters on Saturday, while on an inspection of the bridge and alternative routes rehabilitated by the State Government.

The Governor also toured various highways where junctions and roundabouts have been redesigned to diffuse traffic, including Allen Junction, Maryland Junction, and Lekki’s first and second roundabouts, among others.

Sanwo-Olu said the bridge’s repair was long overdue and could no longer be postponed as it would portend danger to the residents.

The Governor urged motorists to be patient and cooperate with traffic management personnel deployed on the routes, while assuring that the Government would ensure speedy work on the bridge.

The Governor appealed to commuters to explore the option of waterways as faster alternative. He said the State Government has strengthened the capacity of the ferry services and currently building six additional jetties across the State.

The Governor said: “I am here to supervise the repair activities and to monitor the effect of the closure of the bridge on the vehicular movement, with the aim to enable us focus on where improvement could be made. However, what we need to communicate to the road users is patience. Our traffic management officers are on ground to make their journey hitch-free.

“The contractor handling the repair work will be fully on site by Monday. In the next three months, repair work would have been completed on the first lane, while they will move to the other lane. While we urge road users for patience, we also advise them to look at the option of waterways transportation in commuting to and from the Island. We have just opened the Ilaje jetty for public use and we are delivering additional six jetties across the State to ease movement.”

While inspecting the newly designed Allen Junction on Obafemi Awolowo Way, the Governor said he was satisfied with the project, expressing optimism that the new layout would relieve the highway of gridlock.

Sanwo-Olu disclosed that the State Government, by August, would roll out 600 buses to ply various routes, including Ikorodu, Abule Egba-Oshodi, and Ikeja. “We are rolling out 600 buses in high and medium capacity. The buses will be deployed next month and they will be seen across busy roads. The medium capacity buses will be plying Obafemi Awolowo Way. Oshodi inward Abule Egba will be priority. We will also be increasing bus capacity from Ikorodu to Tafawa Balewa Square,” he said.

The Governor used the opportunity to explain the slow pace of work on some ongoing capital projects, including the Pen Cinema Bridge in Agege, which, he said, was disrupted by Coronavirus pandemic.

The Pen Cinema Bridge, he said, would now be delivered in October.

He was accompanied on the long-hour tour by some cabinet members, including the Commissioner for Information and Strategy, Mr. Gbenga Omotoso, his Transportation counterpart, Dr. Fredric Oladehinde, Special Adviser on Works and Infrastructure, Engr. Aramide Adeyoye, and Special Adviser on Transport, Hon. Toyin Fayinka.

The UK’s coronavirus lockdown will continue for another 3 weeks

Nigerian universities and a growing army of first class graduates

House of Rep asks IGP to take over investigation, prosecution of...