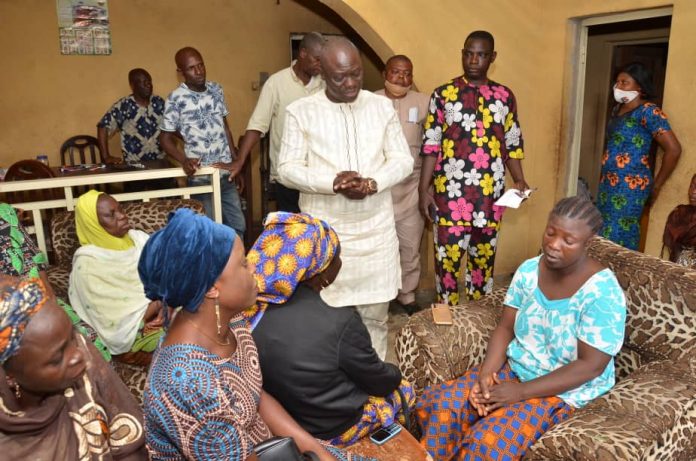 The lawmaker also urged the state government to set up a public panel of enquiry to probe the death of Idris and the injuries sustained by three others.

Salam, who condemned the reckless and lackadaisical attitude of the law enforcement agencies whenever they sight apparently rich youths driving on the road, said the perpetrators of the unfortunate incident should be arrested and made to face the wrath of the law.

It was alleged that the men of the State Task Force had chased four young men, after refusing to stop when they were flagged along Osogbo East-West by-pass around 5:20 pm on Tuesday.

Reacting on Thursday after paying a condolence visit to the family house of the deceased located at Ofatedo in Egbedore Local Government Area of Osun, Bamidele, who is the member representing the federal Constituency, described the incident as unfortunate, saying the police officer involved should be arrested within seven days.

“I just came back from the family of Idris Ajibola who was murdered in cold blood by the reckless police personnel.

“Idris Ajibola would have been 21 in two weeks’ time. He was a young man who lived with his parents in their ramshackle house at Egedore.

“He was hoping that someday, he’d be a blessing to his family. Unfortunately, people who are armed with public fund vent their anger on him.

“The youths are picked upon by security operatives because they wear nice shoes, use nice phones.. This must stop.

“This incident happened forty-eight hours ago, and there is no record of the arrest of the perpetrators of the act. Osogbo is not bigger than New York or Johannesburg where a few hours after similar cases happen, suspects are paraded before the whole world.

“Forty hours after, there is no record of anyone having been identified as being in that red Hilux van that chased these young boys to that destructive end where one lost his life and three others sustained varying degrees of injury.

“I feel that we should be the conscience of this society and arise to demand the police to be accountable.

“If we do not speak out, nothing may happen after forty-eight years. And this may continue.

“I have come to make a demand on the Osun State Government to set up a judicial panel of enquiry.

“I note that the governor has said he was going to investigate; however, I think it should go beyond some investigation.

“There should be a public enquiry to probe into the death of Idris Ajibola and the injury of those three other young men.

“A judicial panel of enquiry that will sit publicly, take testimony from members of the public, and arrive at a judicious and judicial action.

“I’m also calling on the Inspector General of Police to immediately order the arrest of those men on the patrol team for the purpose of their being prosecuted either for manslaughter or murder as the case may be, within 7days.

“The police are being run with taxpayers fund. There is no record that they were being trailed. There was no warrant for their arrest…

“This is not the first time. There are countless cases of Nigerians being brutalised and oppressed by men in uniform.

“I am making an appeal that the IG should do the needful. If it were to be a son of a minister, even the president would have released a statement. This must not be swept under the carpet.

“If this does not happen, I, Bamidele Salam, representing Ede North/South Egbedore Ejigbo Local Government will singlehandedly constitute a legal action against the Nigerian Police Force to claim the aggravated damages for the families of these young men and exemplary damages to prevent further occurrence of such incident,” he said.

Nigerian Ambassador to Qatar presents letter of credence in Doha