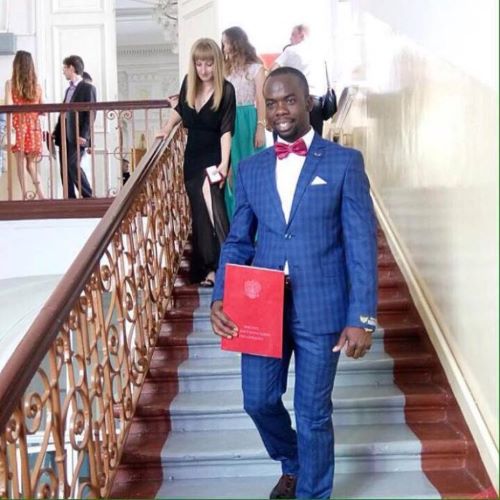 The First Class graduate from Cross River State who recently claimed he had developed a cure for Coronavirus has died.

His death was disclosed to Newsdiaryonline by his family member.

After reaching out to this newspaper, our reporter kept in touch with him.But the news of his death was broken in a dramatic manner as a phone call to Bright was picked by a family member who delivered the sad news of Bright Eworo’s death.

The family member, who gave his name as Victor Eworo, late Bright’s elder brother then related to Newsdiaryonline the cause of his death as post -surgery complications.

According to Victor, just six days after his brother’s return to Nigeria on completion of his studies in Russia, he had a ghastly accident that nearly claimed his life in August 2018.

“It was the accident that led to the surgery which was performed by one (doctor, name withheld) in an Estate in Lagos.

“And for the past one year and six months, he never complained of any pain until during the lockdown when Bright started feeling pains at the region between the stomach and chest.

“His surgeon, .. who carried out the surgical operation was contacted and he prescribed some medications while advising that if after 5 days of no relief, Bright should be taken to the hospital”.

According to the family member, it was not up to that given time when late Bright’s condition deteriorated and he was rushed to (the same) Hospital in the evening of a Tuesday.

However, his condition couldn’t be managed at the hospital, therefore he was referred to ( a teaching hospital in Lagos).

“We left (the private hospital) at Thomas Estate by 9am but it took us four hours to reach (the teaching hospital) at 1pm due to the lockdown.

“We finally arrived at (the teaching hospital) only for the medical personnel to abandon my brother even as he writhed in pains. It was not until 6pm before he was given a bed space after we were asked to pay ₦50,000 deposit and another ₦40,000 for drugs.Sadly enough, Bright gave up his fight with death, just some few minutes after midnight on Thursday”, says Victor.

The sad story of the death of a Russian trained first class graduate in Chemical Engineering is something quite unfortunate.

Recall that Newsdiaryonline had broken the story of a Cross River State born Masters degree holder in Chemical Engineering with claims to a vaccine for the cure of Coronavirus.
Bright Eworo who obtained both his first and second degree in Chemical Engineering with first class honours from Russia Federation University in Kazan had contacted Newsdiaryonline with hope of reaching the out to the relevant stakeholders about his COVID-19 cure claims.

When asked why he didn’t contact the government of his State, Eworo in a frustrated voice recounted his futile efforts in getting his State Commissioner of Health to assist.

However, according to him, the Commissioner showed no interest in his discovery.

When Newsdiaryonline contacted the Commissioner to get her own side of the story, she replied that her lack of interest was because there was no COVID-19 case in the State and moreover Bright should be asked where he was at that period of time.

When Eworo could not get the attention of his State government, he started looking at other avenues of getting his vaccine recognised as he constantly spoke with Newsdiaryonline.

Unfortunately, his efforts have ended with his sudden death.

Meanwhile, late Bright Eworo who was the hope of his entire family for a better life was the third of among his parents’ children.

Their parents who are still alive back in their village, Anong, reportedly said “if death is so in need of a life, it should have taken both of us instead of killing the only ray of hope in the family”.