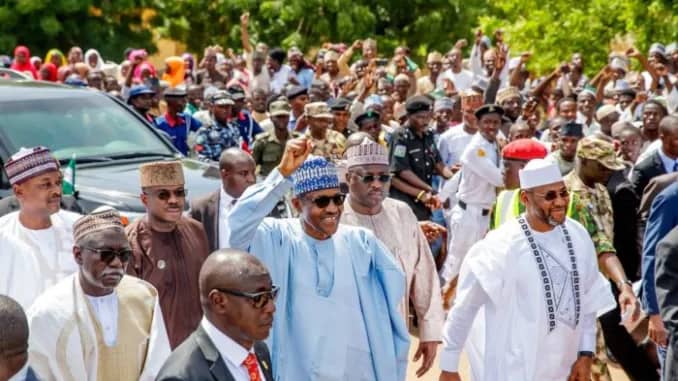 He had been in Daura where he spent eight days in his country home.

Before his departure about 4:00 pm, the president received the guard of honour from troops of the Nigerian Army and Nigerian Air Force operating under the 17 brigade and 213 Forward Operating Base respectively.

The State Governor, Aminu Masari, his deputy, Mannir Yakubu, Speaker of the State House of Assembly, Tasiu Maigari and other top government functionaries including well-meaning citizens in the state amid tight security were on ground at the Umaru Musa Yar’adua International Airport to bid farewell to the president.

Earlier in the week, the President inaugurated a number of projects completed by both the federal and state governments, including the Organic Integrated Farm Estate established by the National Land Development Authority (NALDA) located on the outskirts of Daura.

The farm has the capacity to generate over ₦1.7 billion in the first year.

During his stay in Daura, the President also joined Muslim faithful to mark the Eid-el-Kabir festivities.

Members of the National Youth Service Corps (NYSC) in the state also paid a visit to the President and he gifted them two cows, 20 bags of rice and ₦1million to mark the celebrations.

Why Nigeria must restructure or risk breakup —Adeboye

We can re-write Nigeria in Arabic — what matters is governance,...

Edo 2020: Catholic Church urges faithful with PVC to exercise their...